Another old recording dredged up today thanks to the cassette to digital converter. I was having a discussion with Mr Key, proprietor of Hooting Yard, regarding  Soviet era radio stations and recordings thereof. I used many such recordings in performance and collage in the distant (80s) past. And I was looking for some of those old recordings to share with Frank, with whom I share an interest in such political arcana. I was particularly looking for recordings from Radio Tirana out of Albania as these were especially doctrinaire, remind us of Cornelius Cardew and for some weird reason seemed to be delivered with an Australian accent.
Well no such luck but I did trawl my cassette archive/dusty cardboard box and find a sound collage from sometime in the 1980s entitled Camouflage which features, amongst many many other sources, a recording from Radio Prague. It is made up of 4 tracks of tape collage, guitar improvisation and 'electronics'.
My memory is a feeble thing these days but I do have the vague idea that the whole thing might have been 'engineered' by my old mate Outaspaceman.
It is to be found here 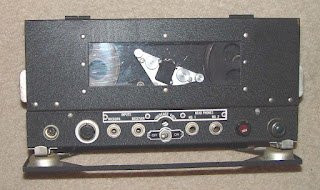 A 1940's wire recorder
Not quite the technology we used to assemble Camouflage but it feels close when seen from a  21st century perspective.
Oh yes and my Cthulu 'fish' decal arrived and as soon as the torrenial rain stops I will go out and apply it to the Banishedmobile.

Posted by Banished To A Pompous Land at 4:11 PM 4 comments:

The Evolution of Fish

Once upon a time, Christians were a secretive sect who hid themselves away and revealed their presence to one another by means of secret symbols like the Ichthys.

According to the Wikipedia this derives from ΙΧΘΥΣ (Ichthys) an acronym for "Ίησοῦς Χριστός, Θεοῦ Υἱός, Σωτήρ", (Iēsous Christos, Theou Yios, Sōtēr), which translates into English as "Jesus Christ, God's Son, Savior".

These days they are not nearly so secretive mores the pity but the symbol has hung around. It's shiny chrome presence seems to 'grace' the backend of every other car in Virginia. It looks like this; 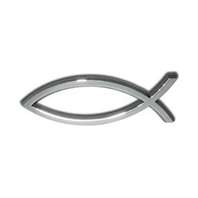 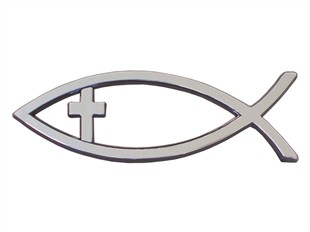 Or in some cases, where the driver thinks their subtle symbolism might be lost on we ignorant heathens  or where, perhaps, they don't understand the derivation of their own symbol, like this; 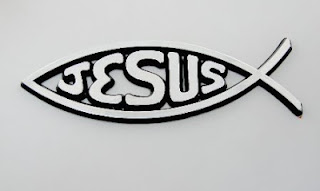 Now I don't object to anyones religion (or sexuality) so long as they keep it largely to themselves and especially keep it out of politics. But the blasted fish whatever the form,  serves to remind me every day that the  Romans had a point. I'd be on the front row these days rooting for the lions.

Now some efforts have been made to subvert this over the years and I do see a handful of cars sporting something like this; 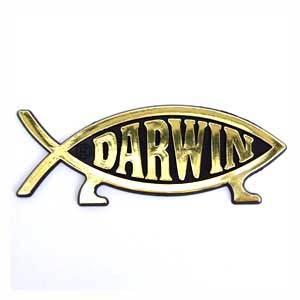 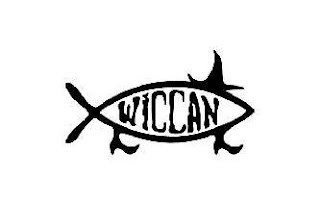 But while some of these alternatives were amusing I was never tempted. But today I was at a stoplight behind a young lady of the 'goth' persuasion whos 'Republicans for Voldemort' bumpersticker had already made me smile when I saw her 'fish'.
I ordered one online as soon as I got home. Who could possibly resist? 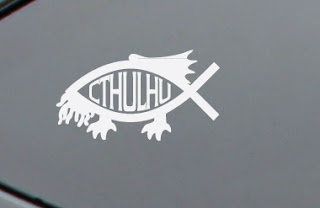 Go on, you know you want one.
Posted by Banished To A Pompous Land at 10:50 PM No comments:

Well I should have been photographing and posting more but I just havent seen so much out in the yard to excite me since vacation. Plus its been tending to rain in the late afternoon by the time I'm home and... the mosquitoes are pure hell.  I came back from 10 days vacation where I saw not a single one and went out into the yard in shorts. In 2 minutes my legs were covered with the little swine. I retired to the house and have stayed there largely the last 2 weeks until something exciting drags me back out.

I did spot this spider on the garage as I came home the other day. 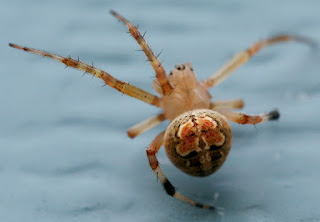 Its an orb weaver thats new to me called Araneus pegnia. Smaller than many of the Orb Weavers but those markings are  nice and rather attractive. 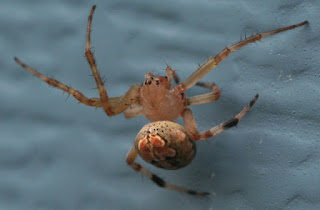 The other distraction has been Mrs B deciding that we should subscribe to Netflix. She gets to watch lots of her favorite Brit cop shows and find lots of new ones. And I've been looking at too many 'old' movies I havent seen in ages. Tonight its been Nicholas Roeg's The Man Who Fell To Earth with David Bowie, How did Nic Roeg fall to earth so hard himself? For a while in the 70's and early 80's he could do little wrong or so it seemed. Now with the exception of Performance (Co-directed with Don Cammell) it seems to have slipped into obscurity and seems likely to be as 'fondly' remembered as Ken Russell . I don't see any sudden second wind a la Werner Herzog alas.

The Man Who Fell To Earth is a future seen from the 70's and I don't think any other future has dated quite so badly.
Posted by Banished To A Pompous Land at 10:26 PM No comments:

I'm still trawling through the haul from vacation despite having been back almost a week. And so here is a largely random selection of goodies.

Leaving the porch light on brought a couple of non-moth visitors on the last couple of evenings. There was this longhorn beetle Elytrimitatrix undata about an inch or so long, well an inch or so without the other inch worth of antennae. I was hoping to see more longhorns being in the woods as we were but this is a nice one. 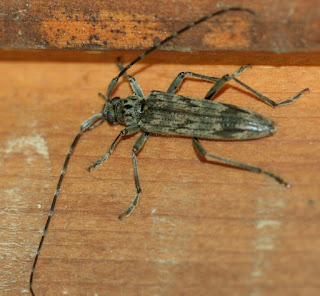 And then this astonishing thing that rested, briefly, on the rocking chair. Alas it didnt stay long enough to get a really good picture but you can see how beautiful and delicate it was. It is an Antlion (Glenurus gratus), The Antlion larva likes in a little sandpit in the ground waiting for ants and other passing prey to tumble into the pit in a trickle of sand into its huge mandibles.  This adult doesn't feed at all just live a brief spell to mate and then dies. B ut what an amazing thing while it lasts. 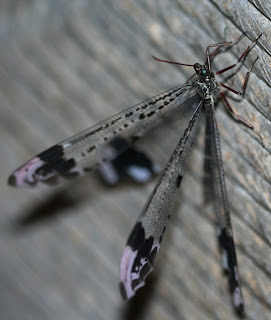 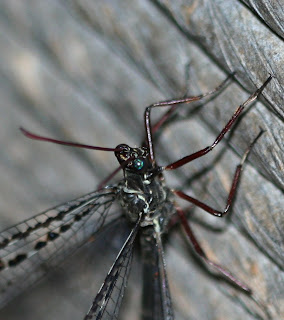 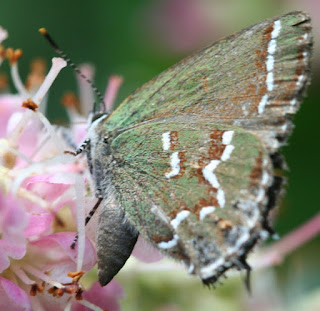 Daytime exploration brought the Juniper Hairstreak on our first day,the only one I saw on the whole trip and still my only one ever. And the thistles along the road provided some new skipper....as if there weren't enough to fret over identifying already. These next two are actually one. The Zebulon Skipper (Poanes zabulon) This first is the male. 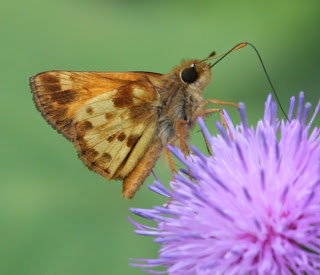 And this is the hugely different, beautifully frosted female. 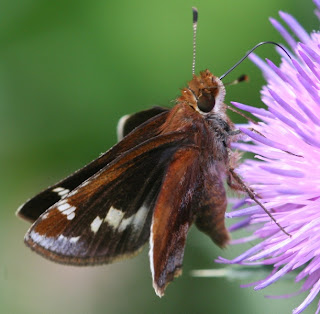 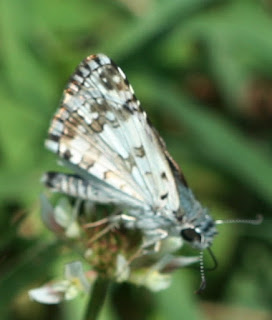 Amongst the Clubtail dragonflies on the river there were also plenty of Widow Skimmers including this mating pair. The male has the blue and black wings and the female the black and clear, rather tatty ones in this case. 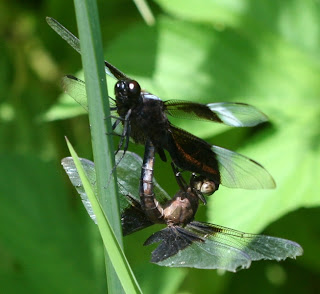 I hvent seen any decent sized mantis at home yet but this one on the roses in front of the
cabin was a beauty over 2 inches long already and not mature yet (see the small wing buds). This isn't our usual Carolina mantis (Stagmomantis carolina ) I don't think. Still not sure which though.
It turns out to be the non-native Chinese Mantis (Tenodera aridifolia)

There are creatures out there that aren't bugs of any sort. Theyre generally regarded as cuter than bugs but thats a matter of opinion. For you none bug fans here is the Pickerel frog (Lithobates palustris) in the National Park sitting very still on the pathside rock. 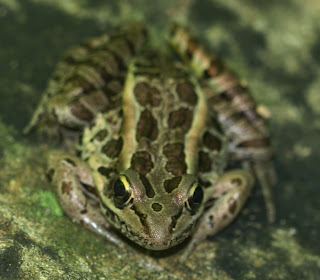 And for the cuteness junkies, here is Bambi. 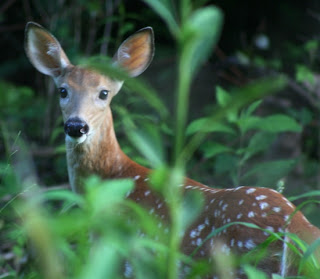 Posted by Banished To A Pompous Land at 11:19 PM No comments: