I went out to Hofler Creek again yesterday with Banished Jr. It was more like spring, briefly at least, but we still couldn't find the Henry's Elfin or the Falcate Orange Tip.
So we took a longer walk around the lake and just kept our eyes open. About half way around something much bigger and darker than either of butterflies we were looking for came up out of the dry grass beside the lake. Now I'm kind of picky about the look of my specimens as a rule, but if its something new then a scruffy, worn and over-wintered specimen will make it. Especially when its a butterfly thats a near legendary rarity in the UK. The Camberwell Beauty doesnt breed in the UK but it does turn up from Europe now and then up to a few hundred sightings a year. Over here it's called the Mourning Cloak (Nymphalis antiopa) this was only the second I'd seen in 9 years and the only one I'd managed to photograph. Yes its very much the worse for wear but you can see how striking it is when its fresh. 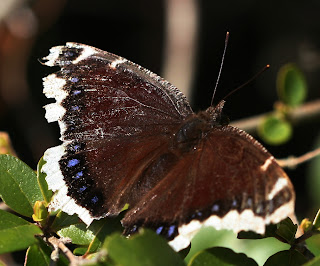 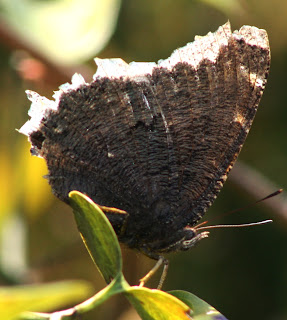 We completed our circuit of the lake, and took one last wander down the salt marsh path where I've seen the Elfin and Orange Tips the last couple of years, without seeing anything else. Then heading back to the car we finally saw one more little butterfly low over the grass of the path. I did think for a moment that it might be the Elfin but there was too much colour and it was noticably larger. Happily it settled on the grass again and I got my shots. It turned out to be the American Snout (Libytheana carinenta). Its another butterfly I've only seen once before and I'd failed to get a picture that time. Its called the Snout for obvious reasons. Its thought that when the wings are folded that the butterfly looks like a dead leaf and the 'snout' looks like the leaf stem. 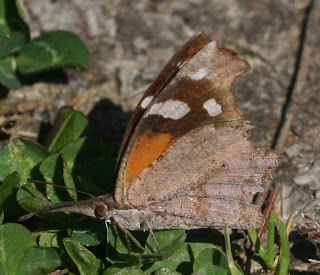 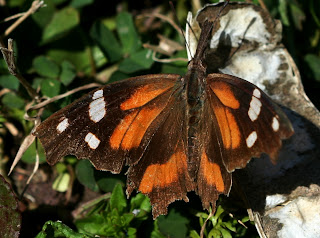 Back at home we had a female Red Bellied Woodpecker (Melanerpes carolinus) on the feeder on and off all day. Very attractive little bird, though not as small as the Downy and with a longer, more substantial bill. 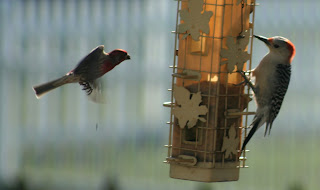 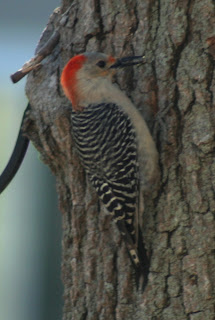 Posted by Banished To A Pompous Land at 9:58 PM No comments:

The Dance Of The Crane

Still cold so here is something from the iPod again.

I don't have many movie soundtracks . But there are a couple of Ennio Morricone  albums including Sergio Leone's Once Upon A Time In The West. I spent so many years watching that movie on the BBC. It started out in magnificent wide screen capturing the whole amazing composition right up until the train arrives and then the whole thing would go back to pan and scan.

Every time I watched it I'd hope they had a real print but every time they broke my heart.

But now I have my own widescreen to watch when ever I want. To see the blue eyed black hearted Henry Fonda. And to hear the occassionally eccentric choices of character motif. But there are moments in the movie where the music and the image are at as perfect a pitch as any movie ever made. I can't hear this track without seeing that crane shot, frame perfect in my minds eye.

Claudia Cardinale and a train and a town.
Posted by Banished To A Pompous Land at 4:34 PM No comments:

Last spring was warm. Ridiculously warm in fact. But at least it arrived.
Last year there were honey bees on Valentines Day, Cabbage Whites before March 14th, damselflies on March 14th, big unidentified Darners on March 16th and Orange-Tips and Elfins on March 17th.

I went out to Hofler on Saturday with Jr. when it at least wasn't raining but not a butterfly to be seen. Saw a couple of Whites at the Botanical Gardens in the afternoon when the sun came out. Then yesterday it was snowing again. Sad wet flurries but snow nonetheless.

Theres nothing moving out there. Even checking BugGuide no one has posted a dragonfly or a damsel from anywhere yet so far this year. And no promise of anything over 60f for the next 10 days. 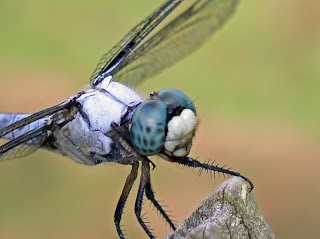 Need some of this now. I'm bored
Posted by Banished To A Pompous Land at 12:16 PM No comments:

A Plague Of i-Pod Keepers

This time last year it had been warm for a couple of weeks and I'd already photographed damselflies and 2 species of butterfly. Right this moment, mid morning on Thursday it just briefly snowed! Its stopped again now and I am planning on going out to Hofler Creek on Saturday hunting the elusive Falcate Orange Tips and Henry's Elfins. But for the moment its not bug weather and so once again I fall back on something from this morning's ride-to-work soundtrack. Actually as it takes me around 25 minutes to drive to work in the morning then this one track is the entire soundtrack!

A Plague of Lighthouse Keepers is taken  from Van Der Graaf Generator's Pawn Hearts album which was released a terrifying 42 years ago in 1971. 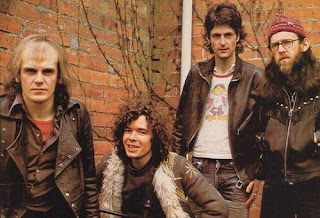 No interminable prog rock guitar solos here. No guitar solo at all. Just fiddly shifting time signatures and Hammills vocal gymnastics. Not for nothing did John 'Johnny Rotten' Lydon acknowledge Hammill as influential in the vocal sound of the Sex Pistols.

Happily Van Der Graaf Generator continue to this day, having reformed in 2005 after a 30 year hiatus. Jackson is no longer a member but the other 3 are writing and recording new material and playing regular gigs.

They are noticeably less hairy these days but arent we all? 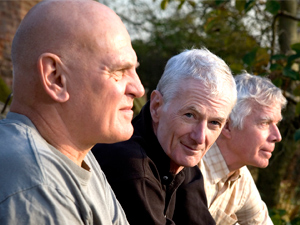 The featured recording isnt the album version but a live performance for Belgian TV that I first saw sometime in the Summer of 1975 when I was sitting at home between O level exams.

Posted by Banished To A Pompous Land at 1:25 PM 2 comments:

Adventures In A Yorkshire iPod

From the iPod on this morning's drive to work comes  Adventures In A Yorkshire Landscape by Be Bop Deluxe. This is from the Live! In the Air Age album and stretches the little throwaway song into a wonderful showcase for Bill Nelson's guitar. 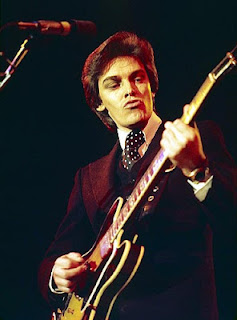 The band were formed in Wakefield in 1972 and were commercially pretty  successful . The problem to me always seemed to be what did they want to be, Glam or Prog ?   As you can see above they certainly didnt dress Prog. Nelson himself never seemed sure and dissolved and reformed the band a couple of times as its style changed. By 1978 it was all over and Nelson had moved on to Red Noise and a host of less commercial solo projects.
One thing for sure though, Bill Nelson was one of the finest English guitarists of his day as shown by this live track.

Sorry to say that theres no video for this one but its no matter. This version is so wonderful we can stand to sit and look at a blurry album cover shot featuring a still from  Lang's Metropolis now can't we?

Bridges and rivers and buildings pulled down
Time spent in places my footsteps had found
Mirrors in ballrooms lie smashed on the ground,
Walking with November mists

Fires on spires and chimneys of black
Fields on horizons with pylons that crack
With singing sad wires for council house mystics
To apply their statistics
And read the tea leaves,
Time knows no limits for days such as these.
Posted by Banished To A Pompous Land at 11:59 AM No comments:

We are returned from our long weekend break for Mrs. B's birthday. We spent 3 days on the Eastern Shore of Virginia on the island of Chincoteague. Its out of season, very quiet, very cold but thats a lot of the pleasure. It will be heaving with visitors in the summer and plagued, as is every wetland in the Mid Atlantic, by bloody mosquitoes.
But we found a nice place with off season rates and an indoor heated pool right on the doorstep of the Chincoteague National Wildlife Refuge home at this time of the year to huge numbers of overwintering wildfowl. 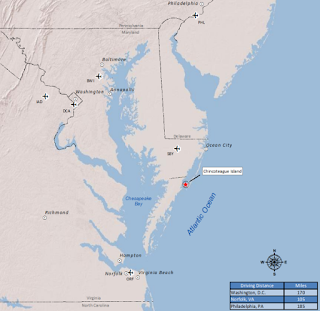 We just went to relax, wander, eat seafood and in my case take pictures. Even Jr. enjoyed the freezing cold windswept but empty and endless beach with its enormous Knobbed Whelks and Horseshoe Crab shells. 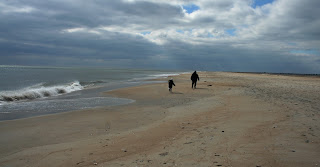 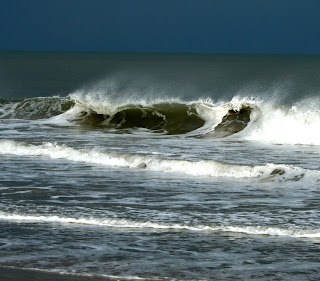 And I got some of the best photo-ops I've had in an age. hell even the birds cooperated. Especially the hundreds of Snow Geese on the lagoons just behind the beach. Even I can take bird pictures when there ar so many to point the camera at, 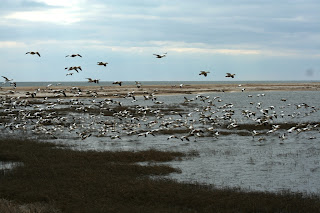 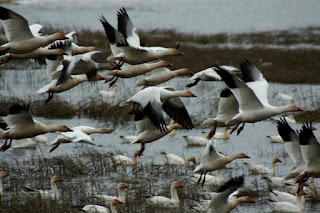 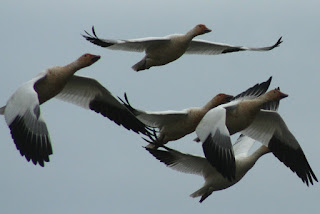 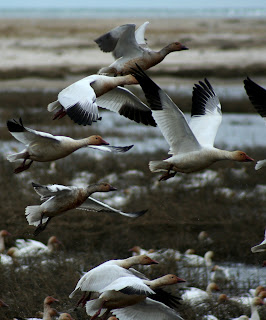 And for cuteness there are the Chincoteague wild ponies 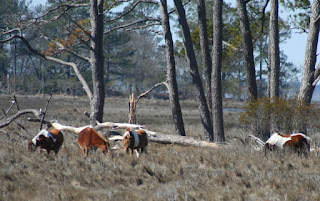 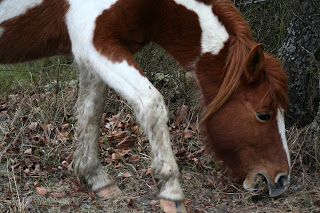 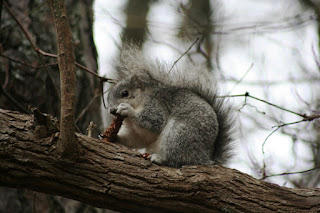 And more Herons and Egrets than you can, or would wish to, shake a stick at. 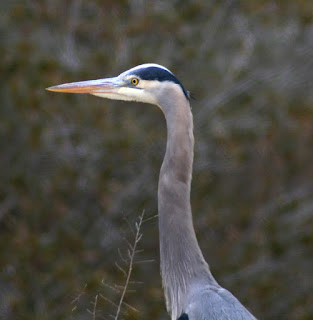 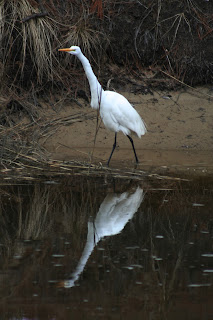 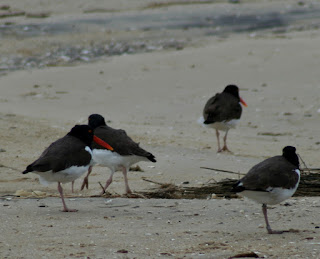 And we even got to visit the adjoining Wallops Island NASA Spaceflight Center and show Jr. the visitor center and explain that once upon a time men went to the moon and everyone else in the world was utterly enthralled. He didnt even know what an astronaut was! 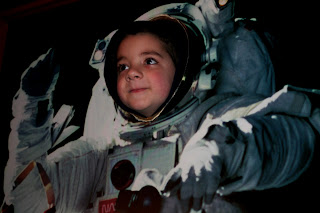