Well I successfully managed to not photograph a grey heron flying low over the pond on Friday and apart from that there is not much moving but  short winged green grasshoppers now. This latter despite the temperature pushing 70f in the last weekend in November.
So instead of birds or bugs here is a tree.
A Wooden Tree by Ivor Cutler to be precise.
And for no other reason than that the track popped up on my digital music storage doodad in the car this morning and reminded me how lovely Ivor's work could be. It was also a favourite of my daughter when she was little and I'm now trying to pass the Cutler tradition to Banished Jr. I'm not sure whos responsible for the lovely little animation that accompanies it but it seems perfectly in keeping with the spirit of Cutler. 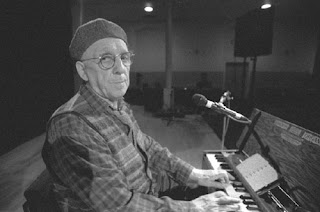 The spirited Ivor
"But we keep on singing,Because we're optimists"
Posted by Banished To A Pompous Land at 2:11 PM No comments:

Hail Henry Purcell who died this day in 1695. Born in  1659(ish) he was the most English of all English baroque composers and is still perhaps the greatest composer that the fairest isle has produced. 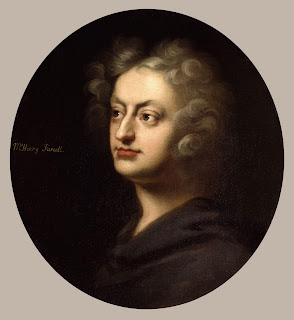 He was a boy choister in the Chapel Royal and later organist there. Indeed for a time he was organist both there and at Westminster Abbey. As such he produced much sacred music and much too in celebration or commemoration of members of the royal family. Odes, anthems and processionals galore; sacred and really not so sacred. All this in a short life that ended in only his mid 30s.
"She loves and She Confesses Too. "
Susan Gritton /The Kings Consort
"O Solitude". Alfred Dellar
Perhaps most importantly he is the first English opera composer. He might not have written the first English opera, that seems to have been Venus and Adonis by Purcell's teacher Dr John Blow, but his Dido and Aeneas is magnificent. This is true opera in that the action procedes by sung recitative not spoken dialogue.
"When I am Laid in Earth" Dido and Aeneas
Emma Kirkby, Taverner Players/Andrew Parrott
Purcell wrote enormous amounts of theatre music and several semi-operas (with spoken dialogue) including King Arthur, The Fairy Queen and  The Tempest  (the jury seems again to be out on the latter).
"What Power Art Thou" (The Cold Song) King Arthur
Andreas Scholl, countertenor
Ensemble Artaserse

For many years Purcell's music was largely over looked by the English, we are a modest and self-effacing people after all as everyone knows.
Happily we came to our senses and he is now recognised as the master that he was.
The last word goes to Gerard Manley Hopkins.
"The poet wishes well to the divine genius of Purcell and praises him that, whereas other musicians have given utterance to the moods of man's mind, he has, beyond that, uttered in notes the very make and species of man as created both in him and in all men generally."
Posted by Banished To A Pompous Land at 2:36 PM 3 comments: 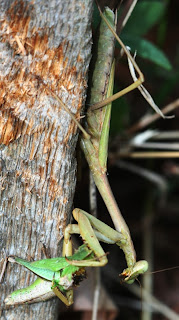 I know, you're all going to think I'm obsessed with mantids and their rather gruesome dietary habits. But you have to admit, they really do look amazing. 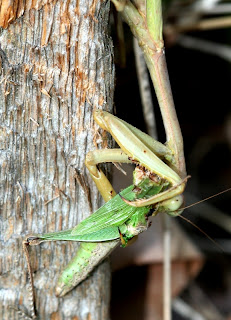 This one caught a major meal, perched at the base on one of the fence slats and had already consumed half the grasshopper when I found it. Very much worth a wander down the yard for this one. For all that both are jumpers and that they have other similarities of form, these two arent closely related. The Carolina mantis is actually more a cousin to the cockroach than the orthoptera (grasshoppers, crickets and katydids). 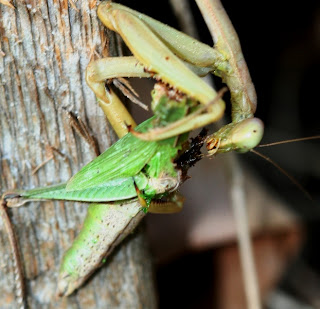 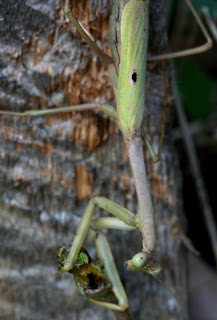 Posted by Banished To A Pompous Land at 10:58 PM No comments:

While The Sun Still Shines

All is not lost bug-wise even as we head for the middle of November I spotted a few stray skippers today out at Sleepy Hole Park, without the camera though.
Yesterday  there were still plenty of varied grasshoppers popping up at most every step. 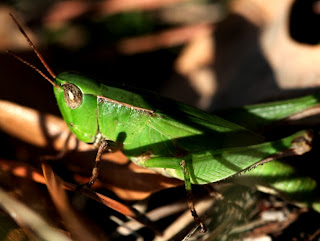 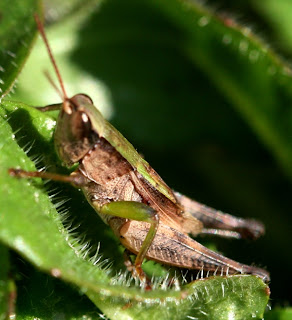 And then when I put down the groceries to unlock the door, there was a single little beetle making its slow way up the frame of the porch chair. 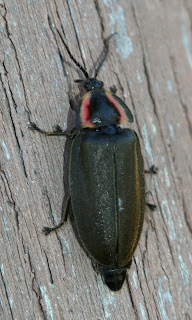 As most everything I see here it was new to me. It turns out that its a Diurnal Firefly. That pink is an unexpected flash of colour on an otherwise flat grey beetle. 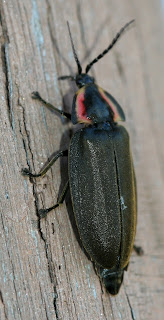 Posted by Banished To A Pompous Land at 9:17 PM No comments:

Refuge of the Roads

Happy birthday Joni Mitchell who it seems is an astonishing 68 today.  I know I'm getting on and all but hell...Joni is 68!

For all the great work she's done over the years I always find myself going back again and again to Hejira. That voice, already a little smoke deepened by this album, and behind it the huge singing rolling fretless bass of Jaco Pastorius. Thats not to mention Pat Metheny, Wayne Shorter or Herbie Hancock.

The album is full of road songs but this is the one, the title track, that I can never get out of my head.

More so now than ever since I recall listening to it as the future Mrs B. and I rolled up I-95 from Salem to Bar Harbor for around 9 hours.
That was my first 'road trip'. I'm a Brit and I dont think it's possible to  drive in any direction for 9 hours in the UK without hitting the ocean, certainly not at a steady 60mph. It was only mid June and the roads were near empty once we got into Maine. We didnt see another car in either direction for over an hour at one point. And this was the interstate. I never figured out how the toll covered the cost of the poor guy out there collecting it as we seemed to be the only $1.00 he collected in that hour.
And Mrs. B of course drove the whole thing because being a Brit I'd happily managed to get by for 44 years without learning to drive. You can be sure that that didnt last long once I got here to stay. I still don't like it mind you and Mrs. B still drove it on the same route this summer, our first time back there since.

Of yes, Joni's birthday.... heres some more from the album.