Time to update the iPod last night. Christmas is coming with its excuse to put Handel’s Messiah back for the festive season. I don’t do carols and I abhor that which passes for Xmas music on the local ‘all xmas’ radio station.  How many hideous versions of the awful ‘Little Drummer Boy’ can anyone stand without wanting to drive headlong into on-coming traffic?  I don’t know how Mrs. B. does it. 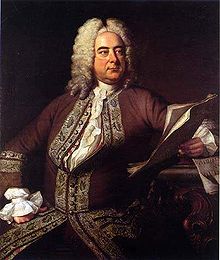 But Messiah is a joy as ever and will belt out frequently in the next couple of months.

People have asked me why a lot of my favourite music is ‘religious’ when I’m not religious, Christian or otherwise, by any stretch of the imagination. Truth be told, no god inspires me in anything I do, but if one wants to hear music that is full of joy or awe or any other sort of real emotion then find one of those religious types be it Handel, Bach, Byrd or Nusrat Fateh Ali Khan and there you go.

It could be argued of course that certainly until the 19th century then the church, or the nobility were where the high dollar commissions came from. But there is more to it than that. The big bucks now come from being on Idol or X-factor and I don’t see a great deal of inspiration or ecstasy there.

And in the UK there has long been a tradition from the 19th through the 20th centuries of Choral Society Christmas productions of Messiah with the Huddersfield Choral being the most famous and its something to be encouraged here too. Now a radio station that played nothing but Messiah from Thanksgiving to Xmas would get my vote.

So here is ‘Ev’ry Valley Shall be Exalted’
Text from the  Book of Isaiah. King James version

Mark Padmore with the LSO conducted by Sir Colin Davis
Posted by Banished To A Pompous Land at 12:25 PM 4 comments:

Long May You Run

He is one of my favourite Canadians of whom I have many.  It is an excellent way to endear ones self to a Canadian to know that Neil, Joni and others actually are from the land to the North. 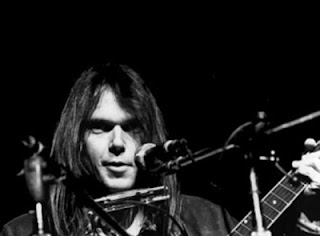 He sings his songs in a shaky voice that are real as the day is long and plays a guitar that will often, still, strip the paint from your walls. And lets not forget who gets invited to guest as a harmonica player. Is it Bob Dylan? No it certainly is not. Its Neil, oh yes it is.

And while Father Ted Criley said, quite correctly, that  ‘it’s  funny how much more right wing you get as you get older‘  that rule seems not to have touched Neil. He’s as active and involved as ever he was and age has only brought a degree of gravitas ‘to die for’ as the young people would say. He survived a brain aneurism a few years back and hasn’t let that or much else slow him down.

Here are a couple of performances from either end of his long, long career.


So many happy returns Bernard Shakey (his movie directing alter ego). And long may you run. 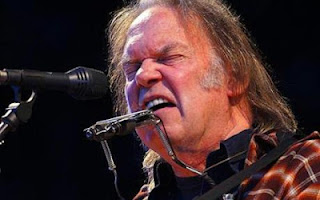 Oh yes and that guitar...

Posted by Banished To A Pompous Land at 12:44 PM No comments:

Well here we are, not blown away or drowned yet again. Hurricane Sandy hit the coast a couple of hundred miles north of us in the end. Sounds like a lot especially to Brits but remember that the thing was 650 miles across by the time it was level with us in Virginia. Happily at that time the centre was still well offshore. “All” we got were 4 days of non-stop rain totalling about 7 inches and winds often steady at 35 mph and gusting 65 plus on Monday and Tuesday. All the nasties were on the northside, the storm surge pushed ahead of the landfall point and so we likely got less of a hit than anyone between Cuba  and Maine.

Banished Jr. was devastated that we had to bring in all the graveyard décor before the weekend and never did manage to get it back out. But at least he got his Trick or Treat in which I wasn’t really expecting. So he was out in his award winning (Hunt Club Farm Fall Festival 5 and under costume contest 1st prize) scary scarecrow costume so all was well with his world. 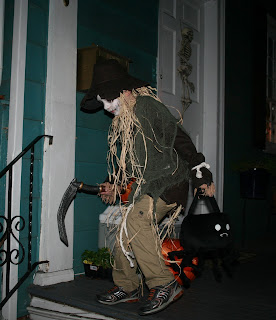 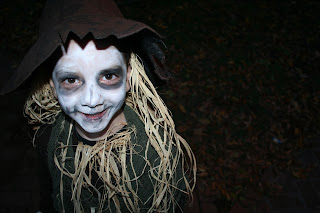 Once again the blog view numbers have me scratching my head. The total page views for October, a month when I posted only twice thanks to computer glitches, were the second highest ever for Banished’s Bugs.  A lot higher, for example, than July where I was posting madly from our mountain vacation including brown bears and painfully cute Bambis. It makes not a jot of sense.

Update/Correction
Thats actually the highest monthly hit count not the second best. Thats even more puzzling then.
Posted by Banished To A Pompous Land at 4:04 PM No comments: