Bet you thought you were rid of me eh?

No such luck I’m afraid. Some computer issues (thank you Microsoft update) and a heap of householder/money pit stuff have kept me away for a couple of weeks. Hopefully I can now get back to business.

I got to see an 80 plus ft pine tree felled in my back yard last week; which was fascinating. The chap who climbed up it with a waist loop and spikes, cutting branches with his chainsaw as he went certainly has my admiration. I could never do it.  I hate to cut down trees but it was struck by lightening AGAIN back in the spring and then on August 26th a freak wind gust blew a 25 foot branch off and dropped it on the deck narrowly missing the house. Narrowly missing meaning by about a foot but only after smashing the deck rail and all the deck furniture.
So it really had to go. You might think our homeowners insurance company would think this was a good idea and chip in to prevent any further damage. No, so long as it isn’t in immediate danger of falling on the house they can wait... until it does. Not that the insurance business has anything at all in common with betting.

So not a penny from them to help with that one. Add to that the ‘depreciation’ taken from the cost of repairs to the deck and replacement of deck furniture “because it had been outside in the weather”.  All of which will spell a new home insurer ASAP. The assessor was quick to inform us that he knew what he was doing , it was his job and he’d been doing it for years. Well yes and that job appeared to be penny pinching and worming.
We still need to get the deck fixed. But the tree at least is gone.

The tree guys in total contrast were splendid. They came in, did an assessment and quote that detailed everything that was involved, were back inside 2 weeks with 9 men and a selection of pretty heavy if dinky machinery, moved a piece of fence, Jr.’s swing set, took the tree down, put everything back the way it was and even ground the stump down to mulch which they put on the garden. In and out in 4 hours and the 80feet of trunk was picked up before 9 the next morning.

I will add exciting action sequence pictures of the felling tomorrow now I know the Blog is working again.

Nearly 3 weeks later it IS working and so here is the update.
TIMBERRRRRRRR...... 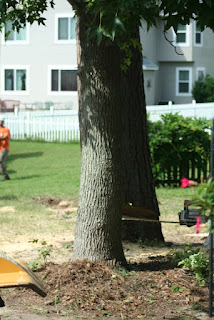 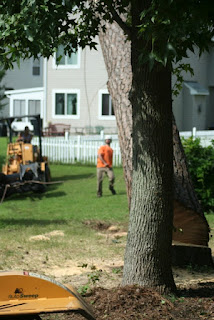 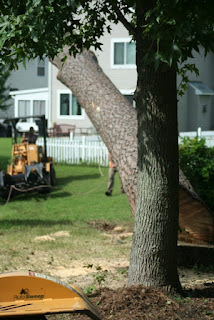 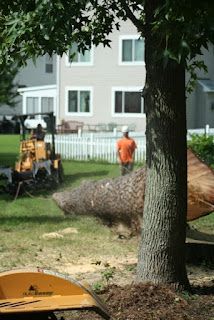 I’ve also got some fun native species caterpillars from a trip to the Botanical Gardens last weekend. I do need to improve my range of food plants to pull in more Swallowtails. 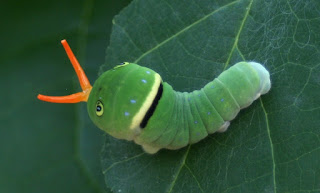 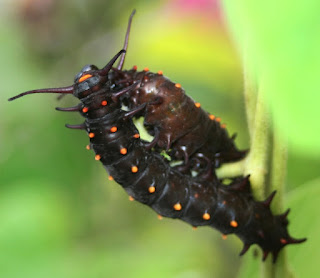