Something Random In The State Of Denmark 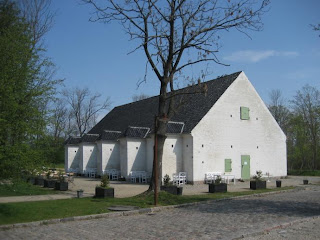 "Once serving as an ammunition depot within Copenhagen’s old fortified naval base of Holmen, Frederiks Bastion functions as an exhibition space.  Built in 1744, the building was designed with reinforced walls to prevent widespread damage should the munitions be set alight."

And back almost as long ago, in 1995, it served as the venue for the 2nd Copenhagen Festival of Experimental Music. Certain Ants played there on August 5th as a part of that festival.

Leeds to Hull, Hull to Zeebrugge, across Holland, Belgium, Germany to the Baltic Sea, another ferry and into Denmark to Copenhagen. Stayed overnight in a cold water flat overlooking Kierkegaard’s tomb, played 40 minutes, drank beer, stayed the next night bought REAL Danish blue cheese and that weird Danish salty licorice and did the whole trip in reverse. I doubt we made any money but I guess we got our cost covered.

The beer ran out part way through the afternoon but my superior bar keeping skills allowed me to change the barrel much to the chagrin of drummer Raymond Strid who was convinced of his Swede's natural beer drinking expertise would make him the natural hero of the afternoon.

The mosquitoes were a real pain and Martin Hackett swatted one on the pure white wall of the performance space and didn’t that make a mess. 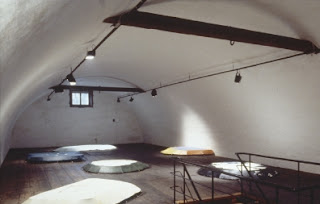 The second piece of the day can be found here.
Posted by Banished To A Pompous Land at 2:27 PM No comments:

A little snow can make anything look better. 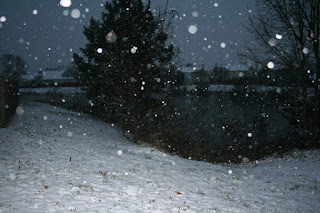 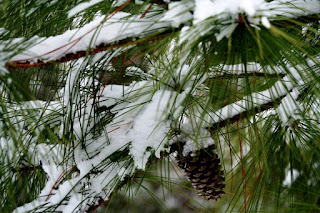 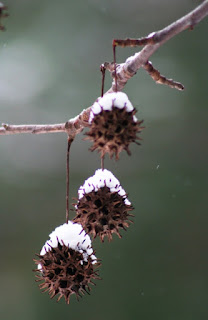 Despite it taking me an hour and a half to get home yesterday a little snow is always welcome. There was less than 2 inches and really it shouldnt have had any real impact on traffic if people around here didn't freak out if it so much as gets a touch frosty. And god knows they don'y know how to drive in it. There were those creeping at 20 mph on the interstate and those tearing along at 75 slamming on the brakes as they came up 2 inches off the back end of the panic striken. If we'd all done around 50 we would all have progressed happily.  Enough moaning though.
Pictures instead. One of the pleasures is that the cold weather pushes birds into the yard and onto the pond.
Particularly welcome on the pond are the Hooded Mergansers (Lophodytes cucullatus). They only turn up when the cold drives them off the river but they are very striking when they do. The males have the russet breasts, the black and white wing stripes and the huge white crest on their black heads. The smaller females arent so brightly coloured but their russet crests are attractive too.
The Cormorants also come in from the river I wish the Pelicans had visited instead. I've never yet had a chance to get any Pelican pictures. I only ever see them when driving where I see from 2 or 3 up to a couple of dozen every day crossing the James River on the Monitor Merrimac Bridge Tunnel. 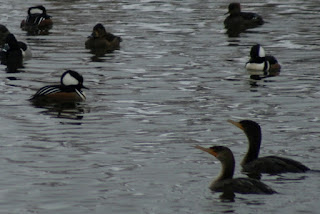 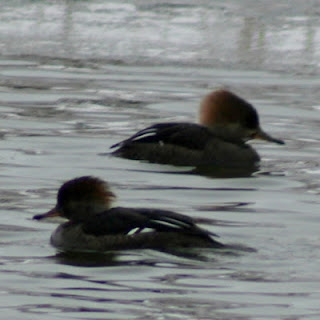 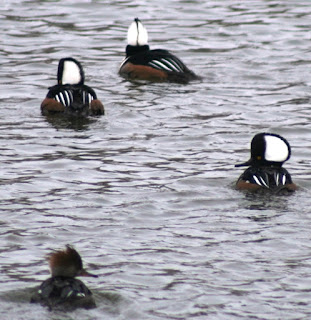 Back in the yard were the Downy Woodpeck, being difficult behind an obscuring branch. 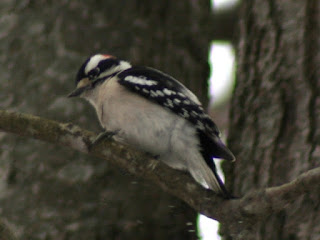 And in the shrubs, a  female Yellow Rumped Warbler. 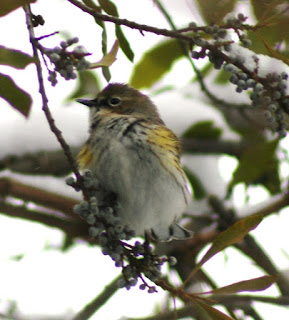 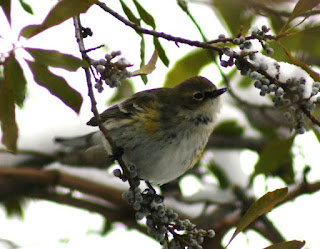 Its still freezing so the snow might linger a little and give some more chances before we turn into a world of slush.

Posted by Banished To A Pompous Land at 3:05 PM No comments: 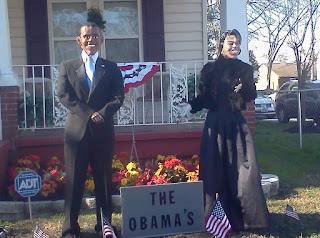 A little late but blame Mrs. B who snapped these on her phone on inauguration day and forgot to e-mail right away.

Snapped around Portsmouth, this piece of folk art in honour of the President and First Lady. 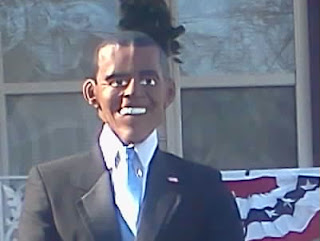 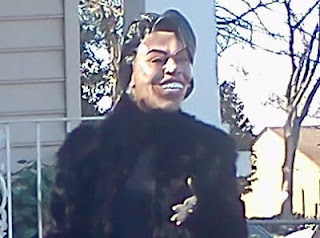 Well I'm assuming this was in honour. With friends like this Mr President...

And finally from the list of search terms that brought folks to Banished's Bugs this past week...

As Frankie howard would have said "Oh No Missus! Titter ye not!"﻿
Posted by Banished To A Pompous Land at 8:37 AM No comments:

I’ve been reading Dylan Jones’ “When Ziggy Played Guitar: David Bowie and 4 Minutes That Shook The World”. A Xmas present from my mother who, when gift time comes around, forgets that I’m no longer a teenager and so buys me things she remembers I like or at least did sometime in the 1970s. Recently this has meant a biography of Ian Dury and this latest, an attempt to capture the impact of Bowie’s appearance on the BBCs weekly music show Top of the Pops on July 6th 1972 performing Starman. For Jones it is a pivotal moment for music, for culture, for Britain. I remember it too and it was indeed unlike anything we had seen before. 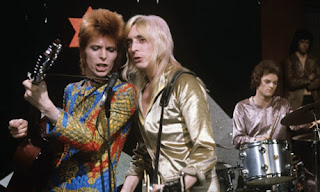 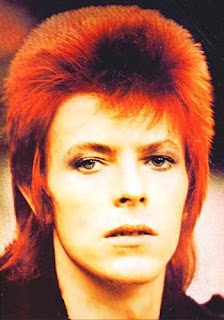 Bowie was hugely important to me and to many of my contemporaries, at least the ones not dressed in denim and immersed in the metal morass of Led Zep and Black Sabbath. In the 70s as he changed and reinvented himself album by album, each shift shifted a whole swathe of popular culture along with it. No Bowie, no punk; the coolest punks were Bowie fans of old. Like him, suburban kids from outer space.

As an aside, outside of the Bowie material what is especially striking is that here is another author telling us or supposedly reminding us that the early 1970s in Britain were like unto living in the less salubrious parts of the Soviet Union. I really don’t remember it as quite so miserable but what the hell I was 13 at the time. Watching the movie adaption of Tinker Tailor Soldier Spy of a couple of years back Britain does look like terribly bleak and Stalinist. By contrast the Budapest scenes look rather stylish.

But back to Bowie. For 10 years he was the centre of everything cool, everything innovative in popular music. But then some time around Lets Dance he drifted from influential into plain successful and that was boring.  Plus we had other things to think about like jobs and kids and all that. Occasionally something happened that brought him to mind again. I bought myself a Discman and Greatest Hits volume 1 for a long train journey and discovered I still remembered every word of every track. And of course there was always my birthday song. One can’t have Buzzcocks ’16 Again’ anymore once you reach 32 so this was thought more appropriate.

The BBC interviewed Bowie at 50 and ran it with their classic mid seventies Arena documentary on the Thin White Duke persona, all cheek-bones and coke. And Bowie at 50 seemed by turns amused and embarrassed by his younger self as are we all. 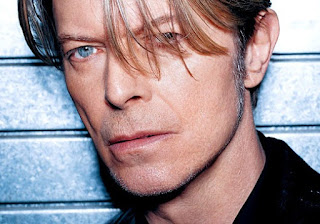 And in 1995 he reunited with Brian Eno and produced ‘Outside’ and for a moment it was like he hadn’t been MIA for 10 years with Glass Spiders and Tin Machines. Then again slowly drifting away and finally for the last decade…silence. Not one new song in 10 years.

Until now that is. Not paying attention to my own Banished bugs Book of Days I missed Bowie’s birthday. And it was Open Culture drew my attention to an impending album and the single from it released on his 66th birthday. 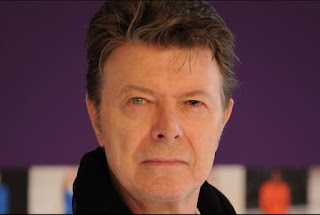 ‘Where Are We Now’ isn’t epic, it isn’t world shaking but its rather lovely and deeply melancholy and for many who grew up with him very touching.

Posted by Banished To A Pompous Land at 11:35 AM 2 comments: