Finally I had a chance to get out into the yard in the last few days. Its lovely not to have to cover myself in insect repellant to step outside, but the cooler weather also reduces the numbers of all bugs not just the nasties. So while this weather, 70F tops with a breeze, is nice to be out in then finding subjects is more work than usual. 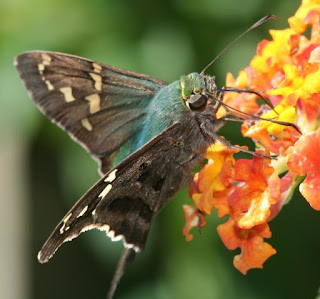 But I did have a visit from our rarest regular visitor these last couple of days. The Long- Tailed Skipper isn’t to be mistaken for any other skipper around. Bigger, tailed (well obviously) and with a blue green iridescence in places totally lacking from any other of the orangey brown mass of the skippers. They don’t visit every year and only in ones and twos but they still turn up pretty regularly, usually later in the year like this. 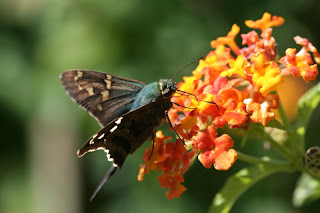 Much smaller, but very striking in its tiny way is Ailanthus Webworm Moth (Atteva aurea). 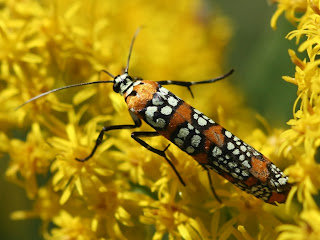 These are around in large numbers now, many heads of goldenrod are covered in them. When I first saw them a few years ago I thought that they were beetles. With those colours, the tightly closed wings and habit of daytime feeding its an easy mistake to make at first. 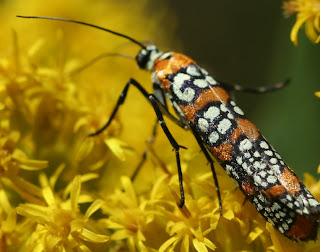 But they are one of those beasts where my pictures never quite seem to capture their beauty. Interestingly its caterpillars food plant is Ailanthus altissima the Tree of Heaven. The interesting bit is that the moth is a native species while the host plant isn’t. The shrub is an introduction from Asia.  The question is what did the caterpillar eat before the Tree of Heaven turned up?
There are still plenty of grasshoppers and their relatives around as always in fall. Some of them large (an inch and a half long) like this as yet unidentified specimen. 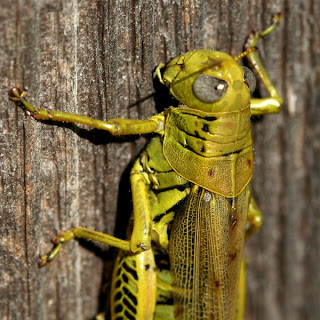 Some are small and very fleeting like this Katydid (?) caught snacking before it hopped off again lost in the weeds. 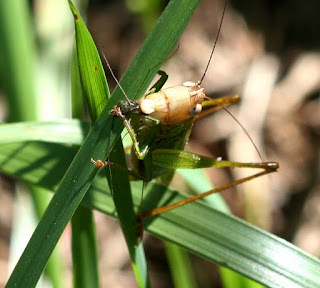 All of these were taken during afternoons outside in the yard working on the Halloween graveyard. 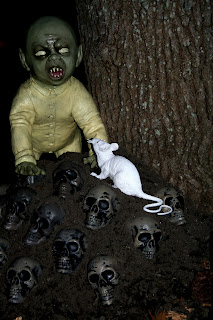 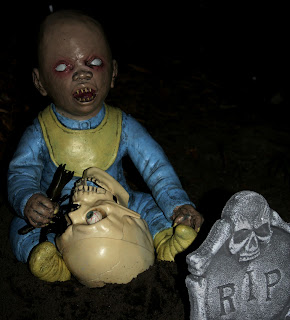 Posted by Banished To A Pompous Land at 12:59 PM No comments:

Still struggling here to get a method of posting my pictures to my photography blog.  I might have to consider posting pictures at BugGuide and linking to them. What a pain in the arse.

UPDATE!
I WENT TO UPLOAD THIS POST AND FOUND THAT THE PICTURE BUTTON HAD RETURNED. sO WE ARE BACK IN ACTION....THOUGH MOST OF THE BUGS ARE GONE AS FALL ROLLS ALONG.

I do have something of an update on the tree branch/deck story of September. We had people come in to quote for repairing the deck despite the cheap penny pinching insurers not providing nearly enough money to get this done. One of the first came in and quoted us $2500 to replace it entirely. That was out of the question. But he did ask the question…’Why do you need a deck rail on a deck that’s barely a foot off the grass’. A good point and one that we happily embraced.

The main problems resulting from the branch incident were:

So not replacing the deck rail was an easy solution to the first problem. The second issue was the more serious structural issue. We were quoted around $500 to remove and replace this timber to put the deck back in good order. But looking at that it seemed all that was really involved was to remove the broken 12 foot 6x2 timber after removing the nails attaching it at the end of each of the 25 deck boards, replacing the timber with a new one, nailing it back in place to the other structural timbers and re-nailing the deck boards.

And so it came to pass that I, Mr. Cack-handed took it upon myself to tackle this $500 project. And do you know, I did it. I did it in one morning. Single handedly but for 5 minutes of assistance from Mrs. B with holding stuff.  I removed the old deck rails, cut them up for disposal, unnailed the boards and removed the broken joist. There followed a quick trip to Lowes for the new timber and a box of nails. On my return I cut it to length and cut one end to an angle to fit with the old (both with my little electric chain saw…most unnerving) and put it back in place. The last half hour was just tough on the knees, up and down hammering 60 odd nails.

Yes I did it! I fixed the deck! And best of all it cost…. a little under $18.00 for the treated timber and the nails. That’s it, $18.00. Woohoo and hurrah for me. I’m turning into an American and falling in love with my chain saw.
Posted by Banished To A Pompous Land at 12:15 PM No comments: