We are always on the lookout for a new park to try. Ideally something for us and something, ie. a playground, for Banished Jr.
So we headed out to Oak Grove Lake Park in Chesapeake on Saturday. There is the requisite playground/climbing frame plus a 2 mile trail around a nice freshwater lake with woodland around. It was very pleasant on Saturday but I suspect that due to the very wet nature of much of the woodland/swamp around its going to be mosquito hell come high summer.
It was one of those days when we saw much more than I managed to photograph. Chesapeake is the favored local hangout for Zebra Swallowtails and I spent a while in futile pursuit of several while Jr played but they were always too high and too fast on Saturday. The same goes for dragonflies, likely Baskettails that also eluded me.

As so often the best came by surprise. There was the caterpillar on the path, and then another and another until we were trying not to stand on them. 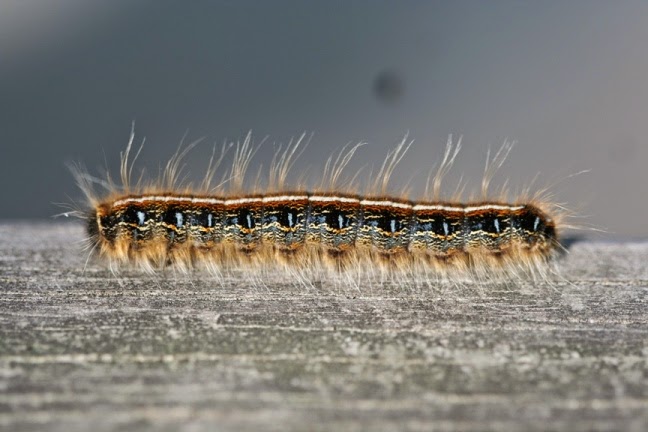 We eventually tracked them down to silken tents in the surrounding trees. 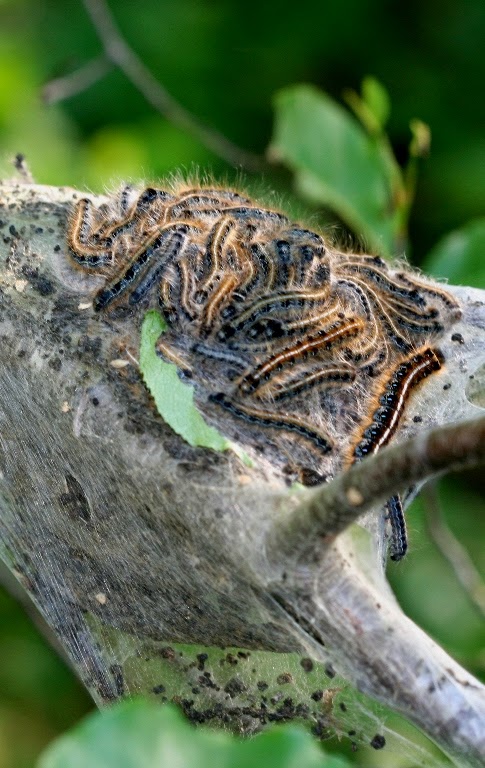 They are in tents because they are Eastern Tent Caterpillars Malacosoma americana. And we found a good number of trees already stripped of the new seasons leaves by these voracious little devils.

And while my eyesight is certainly not what it once was I did spot a tiny flash of shiny elemald green as we walked along. I thought at first is was likely to be a little metallic green bee but seeing where it landed on the path and getting down to its level it turned out to be much more fun. 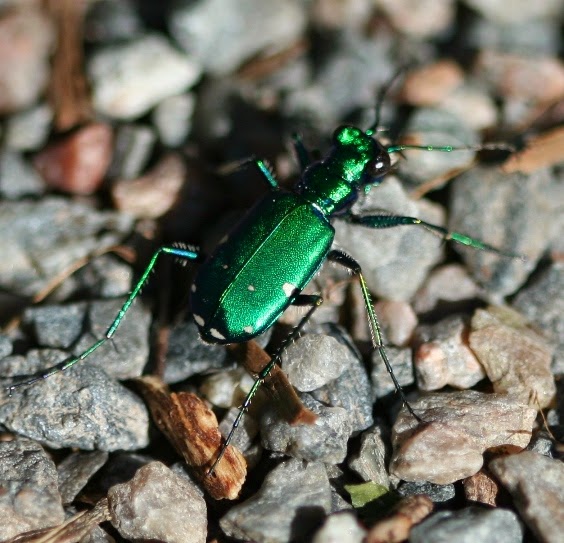 The voracious predatory Six Spotted Tiger Beetle (Cicindela sexguttata) was a nice find but I wish it had stayed around long enough to get a better shot. This really doesnt show off those killer mandibles but after this shot it was on the wing again and gone. These arent uncommon but they are quick and I usually fail to get even the one shot. Even when they stay on the ground they move like lightening which isnt the best thing for the macro photographer.

As we walked around the lake we were all struck by the seeming total lack of turtles. Most lakes, ponds, muddy puddles around here have Painted turtles lounging on every bank and semi-submerged branch just waiting to dive it at your approach. But we didnt see a single on here. We did find just the one turtle but that one was a nice surprise. We found it moving quickly across the path on the way down to the water. Now most Snapping turtles I see are somewhere around 1 to 2 feet in length if you include the Godzilla style tail. But the one we found on saturday was but an infant. It was no more than 6 inches head to tail and we watched in head down the bank and into the path but did manage to grab a picture or two on the way. 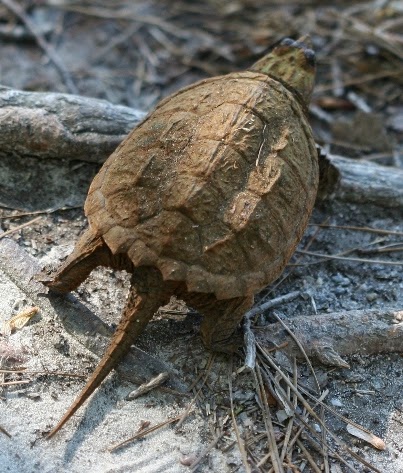 And I forgot on the day but Banished's Bugs was 3 years old on Saturday. I can't think of a birthday song for this one right now though so will pass by in silence.
Posted by Banished To A Pompous Land at 12:14 PM 1 comment: 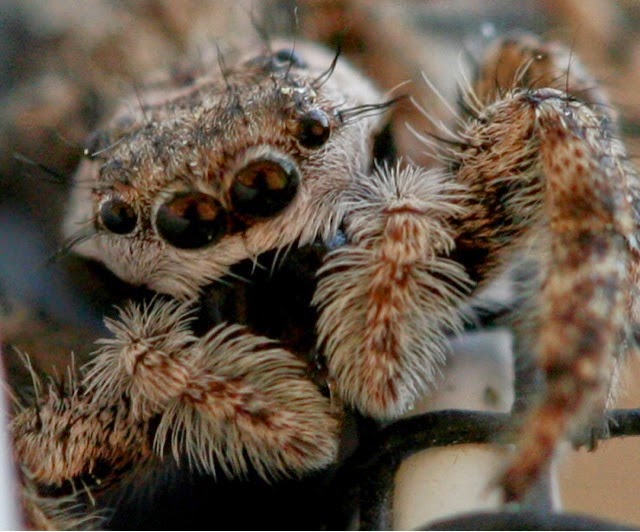 Well no, obviously not, unless you are Mrs. B who hates all spiders with a vengeance. Its just the little jumping spider Platycryptus undatus but I think they look so cool close up I never miss a chance to 'get all up in it's face' they say around these parts. 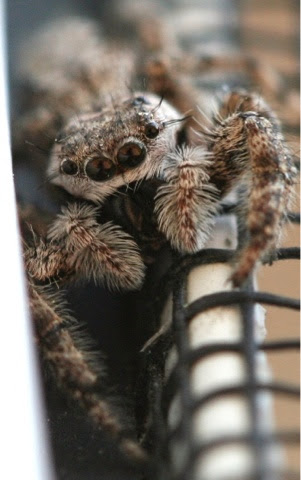 And shot Saturday while the sun was shining, this Leaf Footed Bug (Leptoglossus phyllopus ) just to illustrate how pollen-covered EVERYTHING is. 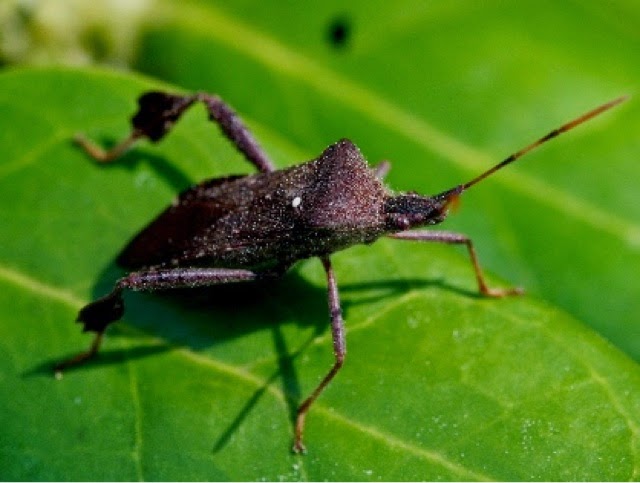 Posted by Banished To A Pompous Land at 8:58 AM No comments:

Live From Virginia Beach With Brooooce

With Mrs B to see Springsteen for her b'day. 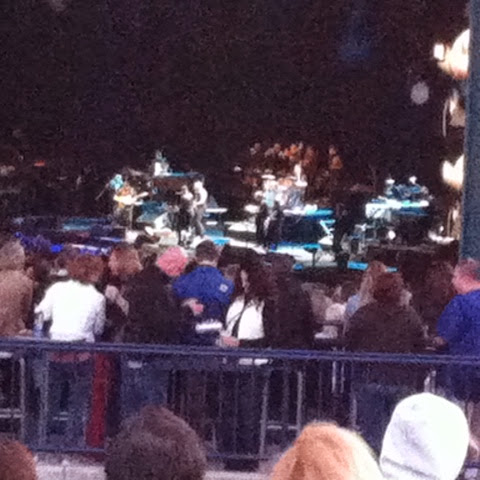 Not so bad for an old bugger. 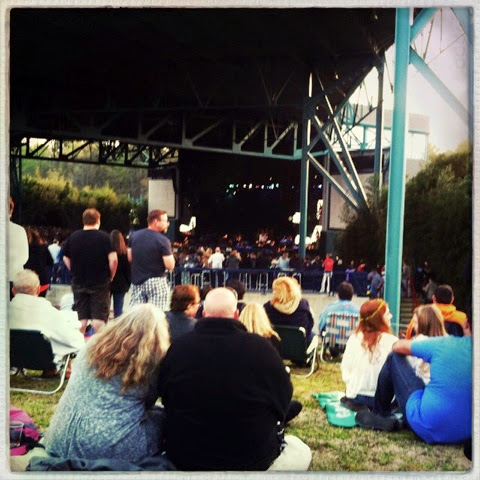 Posted by Banished To A Pompous Land at 7:51 PM No comments: 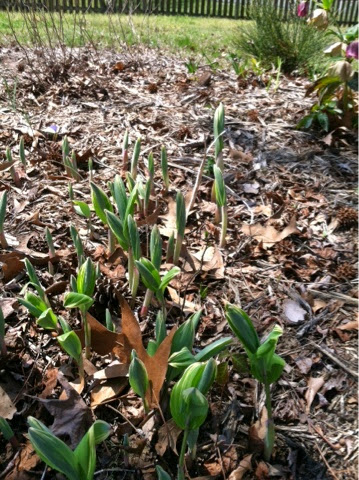 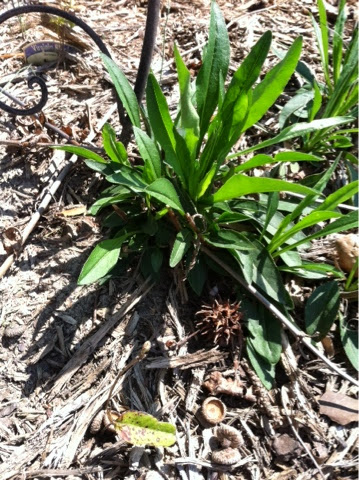 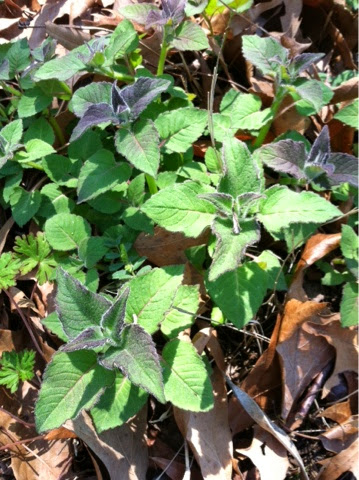 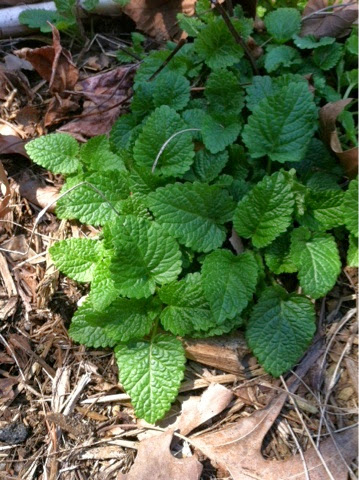 . Actually had the lawn guy here yesterday though he was cutting more weeds than grass yet but hell what use is lawn grass anyway?
25,000 th page view overnight I guess I'll keep going . Something interesting will eventually turn up again.
Posted by Banished To A Pompous Land at 12:48 PM No comments:

Not Live ... But The Pictures Are Better

Pictures from Saturday's visit to Hoffler Creek. It is fun to be able to post pictures the way I did then, as they are taken. But while they really dont look bad on the phone....well they look diabolically bad once you look at them on the 'big screen'

So here are the Henry's Elfin, American Snout and Spring Azure from Saturday so you can see which is actually which. 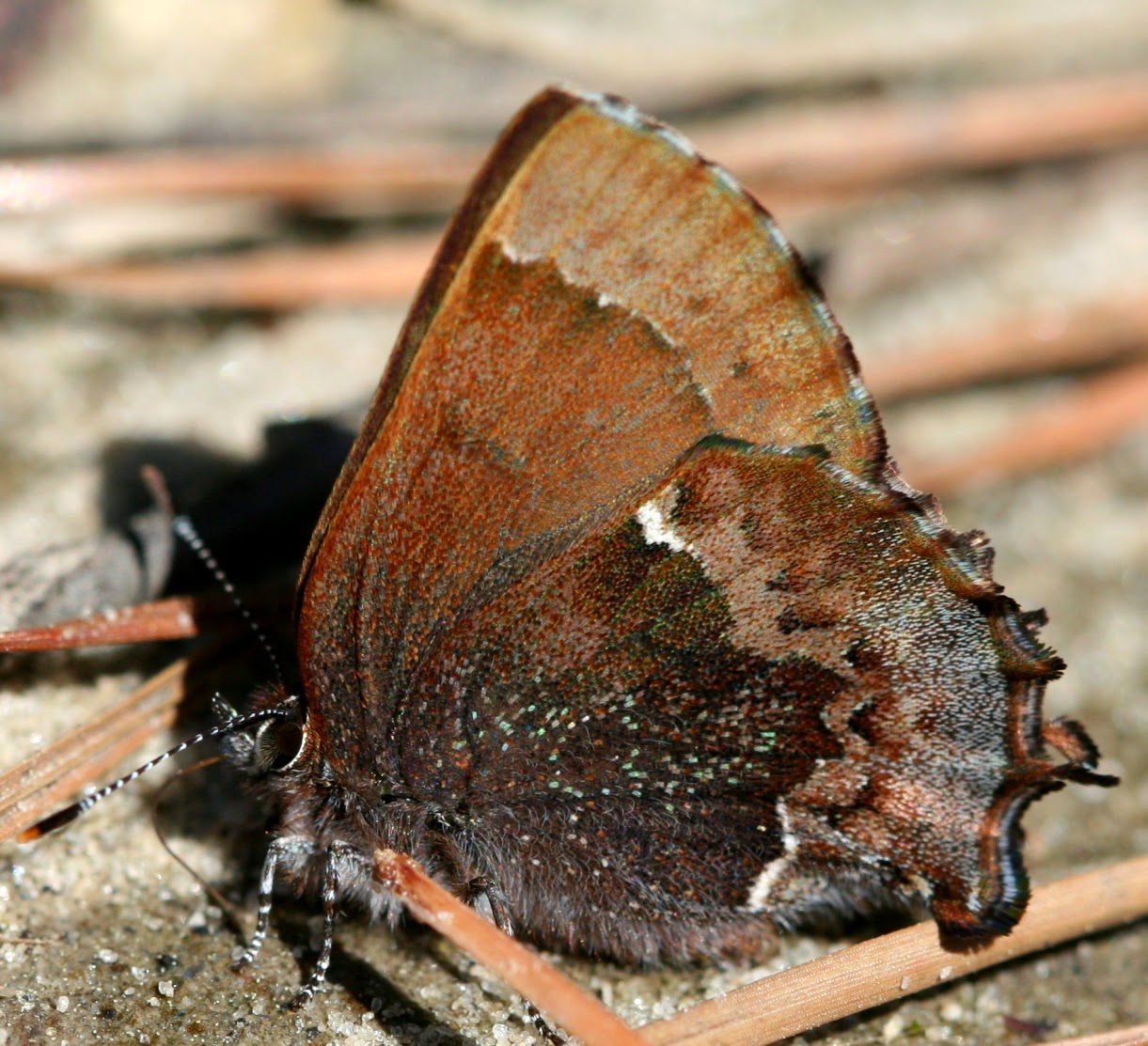 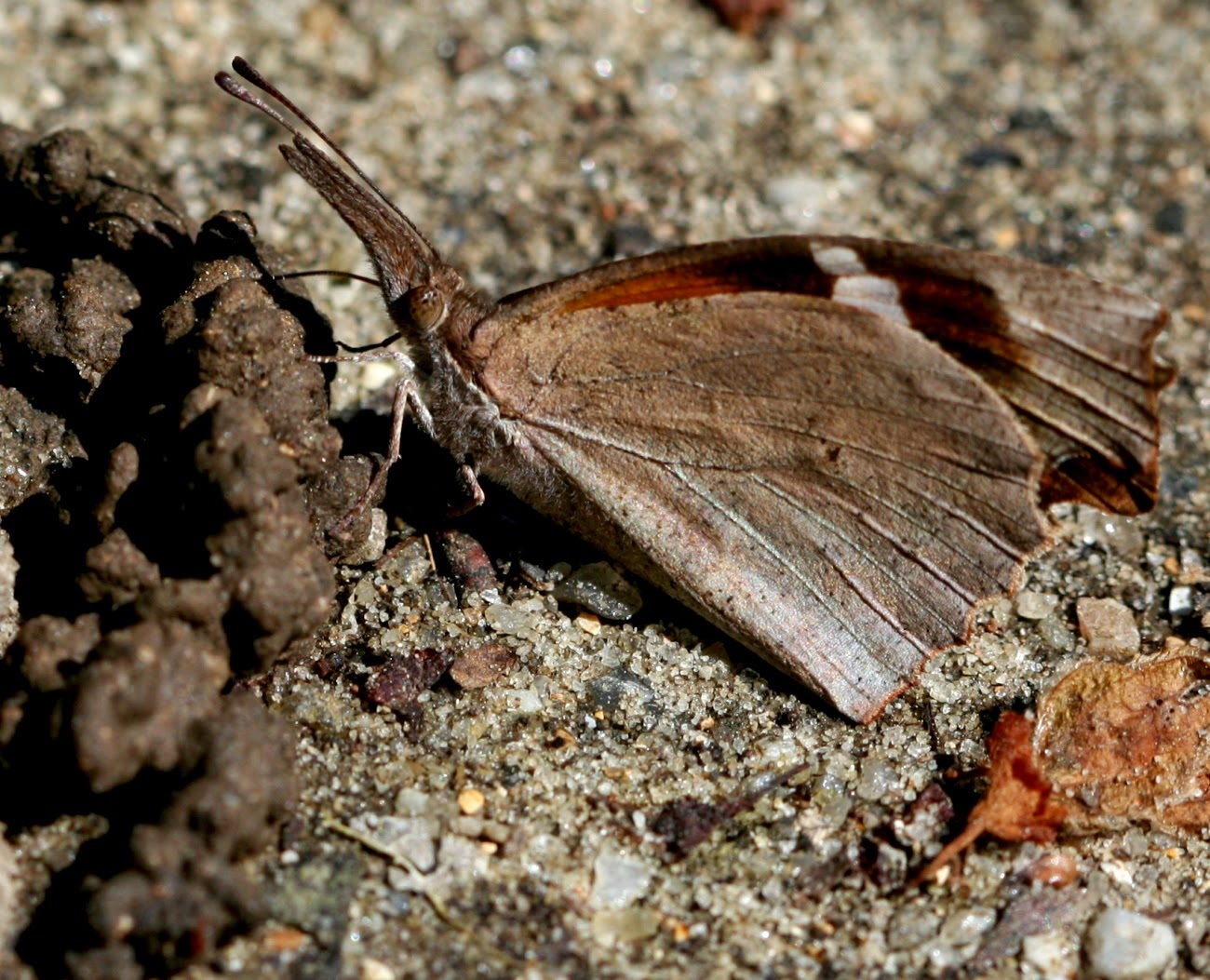 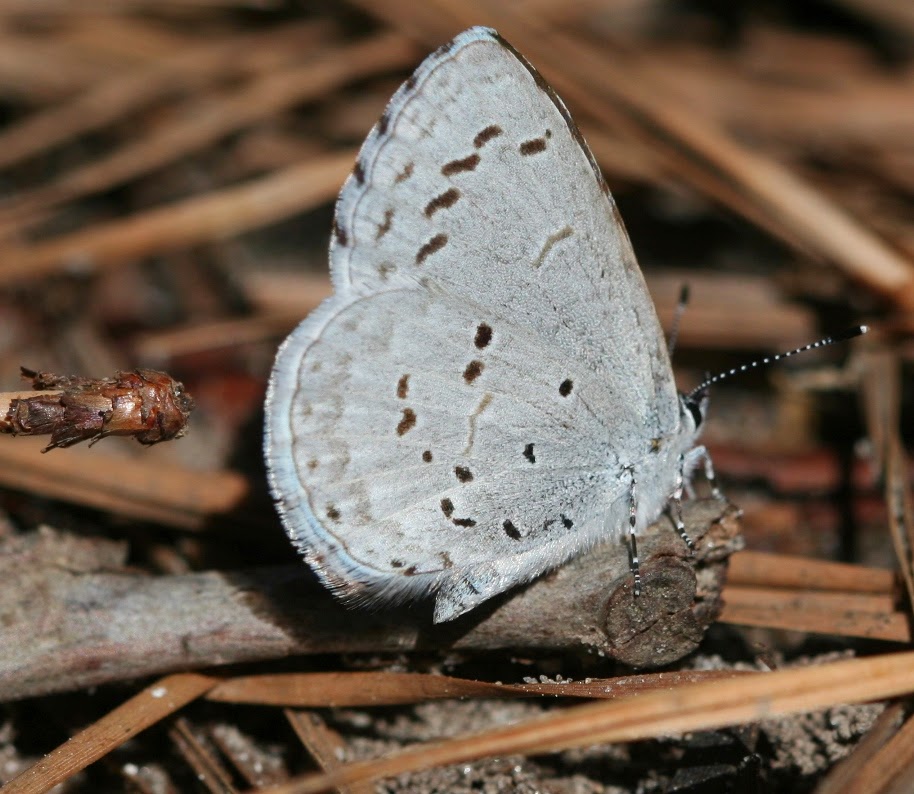 And updating with the female Tiger Swallowtail shot on the same day. The female has much more blue than the male . 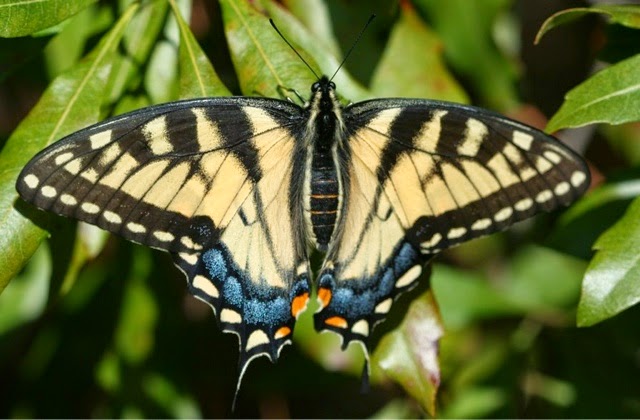 Posted by Banished To A Pompous Land at 1:59 PM 5 comments: 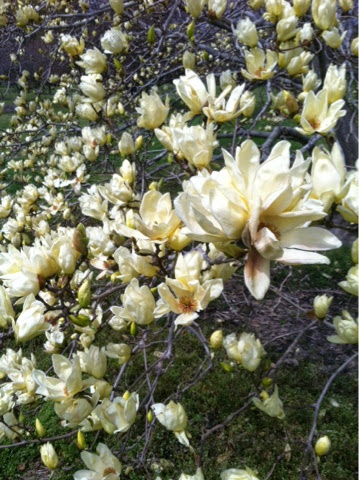 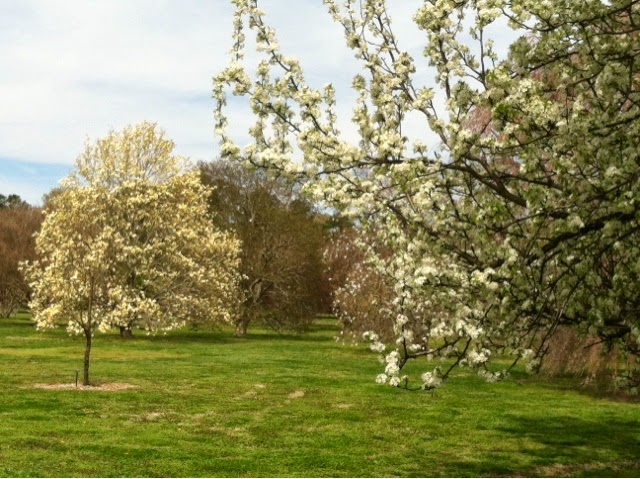 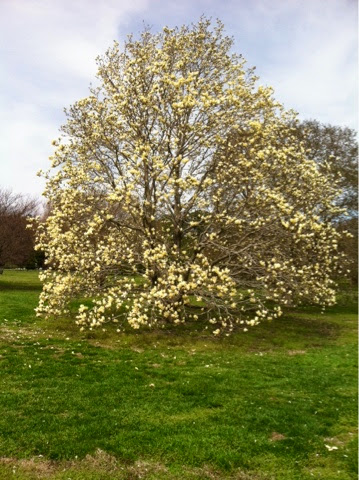 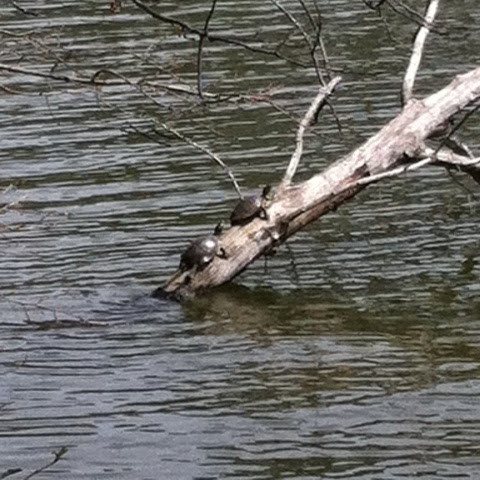 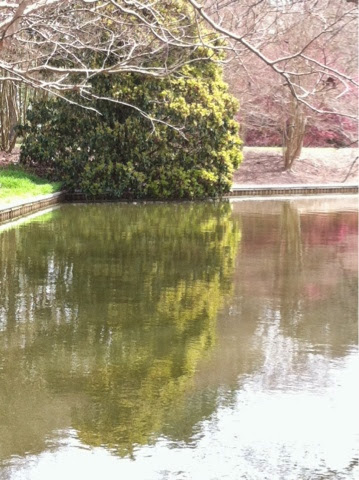 Clearly not my garden. Norfolk Botanical bright if a little chilly there's not much moving yet but some sun bathing turtles. But the blossoms and the flowering shrubs are beautiful and junior and his chum can run around like mad things.
Posted by Banished To A Pompous Land at 1:49 PM No comments: 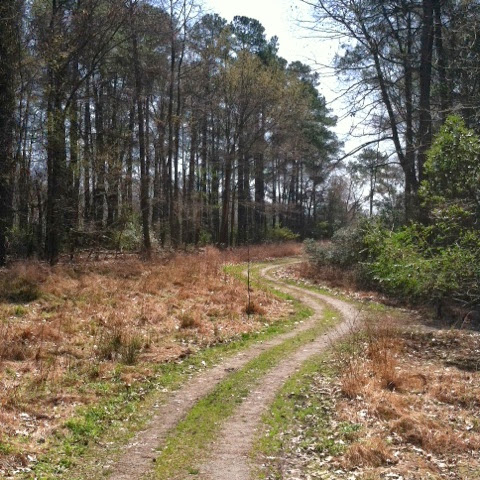 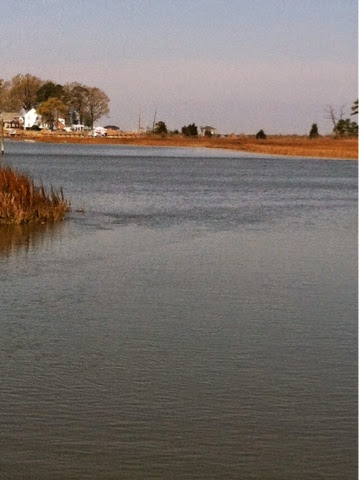 Of course it's a bloody miracle to get ANY decent bug pics from a camera phone and all the rest are on my real camera waiting until I can get them down loaded, sorted, edited and posted some day when the laptop is back in action.
Getting the Henry's Elfin is doubly miraculous considering it's only the size of my thumbnail. A dozen other shots were dumped in order to get that one.
I did miss a great Black Snake shot while I was changing from macro to zoom lens and we actually was 3 snakes out here today.
But just to show what a lovely day it is here's Hoffler in it's low 70s still mosquito free glory. 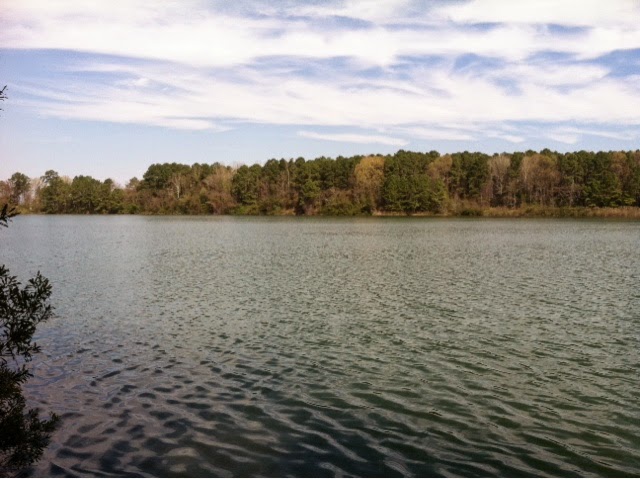 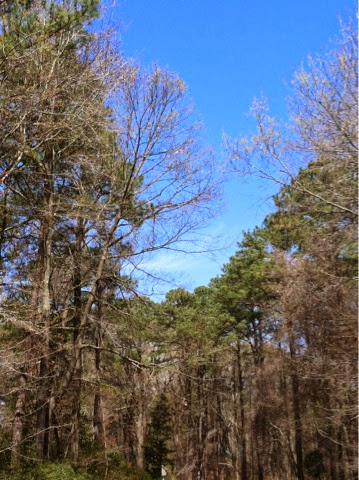 Posted by Banished To A Pompous Land at 2:04 PM No comments:

Henry's Elfin one of many species seen this morning . Others include Spring Azure, Mourning Cloak, Snout and Tiger Swallowtail 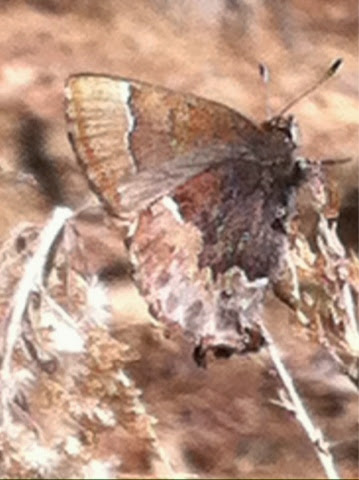 Posted by Banished To A Pompous Land at 12:28 PM No comments: