The Not So Dismal Swamp

UPDATED 06/06/13
To First Landing State Park on Saturday despite torrential overnight rain that lasted until around 7 a.m.

Its only an hour away but we'd never visited before. The name First Landing derives from the fact that this is where the settlers of the Virginia Company actually landed in 1607 before heading out and finally setting up Jamestown the first permanent English settlement in North America.

Its a huge place and we only had time to walk around a small part before we let Banished Jr. have his promised beach time in the afternoon. 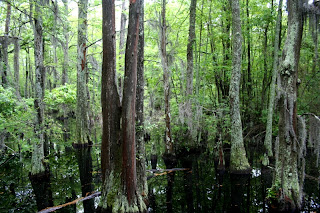 We hiked a couple of miles around the Bald Cypress trail which is a real honest to goodness swamp complete with spanish moss bedecked trees. This is the very northernmost point in the USA where spanish moss can be found and its weird and wonderful stuff. This was the first time I'd seen it close up and I thought it looked more like a long dangly lichen. But its neither moss nor lichen but a flowering plant, a bromeliad. An epiphyte or 'air plant' it is without roots and absorbs it water and nutrients from the air. It has flowers, somewhere, but these are tiny and not easily visible. 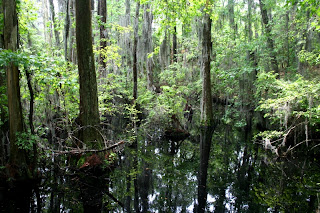 We were fortunate in that its still pretty early in the year and that the spring has been cool until the last 2 weeks. This means very few mosquitoes yet... not none as I have 3  bites to show for the trip but I can imagine that this is something of a hellhole come high summer. Like everywhere else that the bug lover might want to be in summer around here some bugs make it pretty much a no go area. This must be alive with dragonflies in summer.  As it was we only saw a few Eastern Pond Hawks and  Blue dashers that we can see in the backyard any day.

There were a huge number of micromoths around and that would be an ID study in its self for another day.

The most interesting thing bug-wise was the large numbers of Palamedes Swallowtails. We see the occasional specimen of Papilio palamedes at Hoffler Creek or the Botanical Gardens in Norfolk but here they were everywhere. They seem to like the little sunny clearings amongst the trees and its always in the woods that I see them at Hoffler. 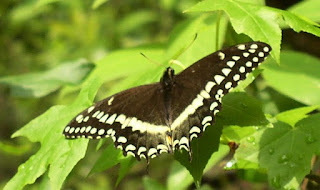 The picture of a Palamedes makes this Banished and Banished Jrs Bugs today. Jr took this one when the butterfly landed right in front of him and he got a better picture than I did today. Yay Banished Jr !
Indeed it was Jrs day all around. As we stood on an overlook deck over one of the swamp pools looking for dragon flies, turtles and whatever else might show up, Jr pipes up 'Theres a big turtle!' . Pointed, we followed and spotted a mossy log and a couple of bits of old wood. 'Noooooo Jr it not a turtle keep looking.' And Mrs B and I went back to scanning the distant reaches. Then again
'Its a TURTLE!'
'No its a rock'
'IT'S A TURTLE! And its looking at us'

And it was, it had stuck one of those bits of log forward and was looking around, a big mossy patiently waiting Snapping Turtle. 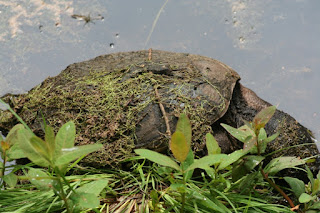 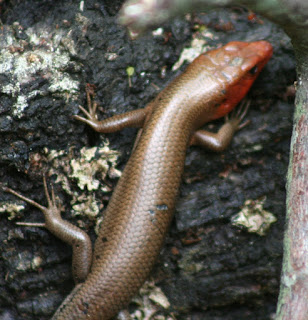 There were lots of 5 Lined Skinks skittering through the duff and over the fallen trunks. 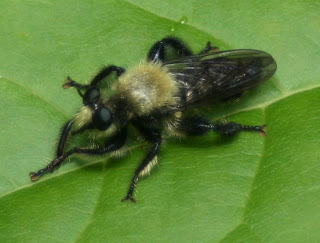 And a number of these Robberflies which need a more precise ID.
Looks to me, after some searching, like Laphria virginica

UPDATE:
Wrong! It took a few days of expert consideration over at BugGuide but, and I quote,

"I think I can barely make out yellow scuttelar hairs, which would make this L. flavicollis."

After a couple of hours wander through the woods and swamps we tucked into our slap-up picnic lunch before heading across the road to the other area of the park, a 1 1/2 mile stretch of beach and dunes on the Chesapeake Bay shore.

Much paddling was done, though the water was cold as Scarborough in August.

But you don't see Pelicans at any time of year in Scarborough.

Oh and it didnt rain all day until we got into the Banishedmobile to head home.

Posted by Banished To A Pompous Land at 4:10 PM No comments:

Firstly memorabilia from a musical performance that was musical heaven created in hell. The premiere of Messiaen's Quartet for the End of Time written and  first performed during his year as a prisoner of war after the fall of France in 1940. 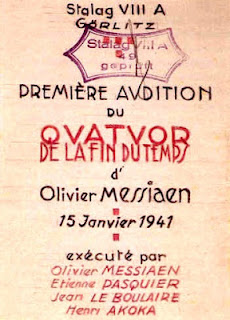 The second is less memorable and very likely musical hell whereever it is played. 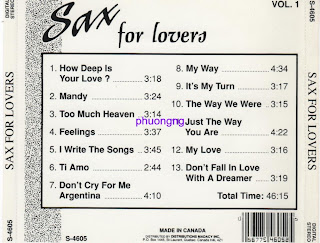 It makes me break out in a cold sweat and I hope that the track list is as close as I ever get.
Posted by Banished To A Pompous Land at 2:07 PM No comments:

Coming Out Of Their Shells

We have 3 species of turtle that visit the yard more or less often.

We have lots and lots of Painted Turtles  (Chrysemys picta). 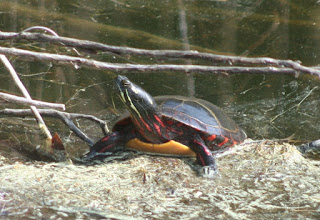 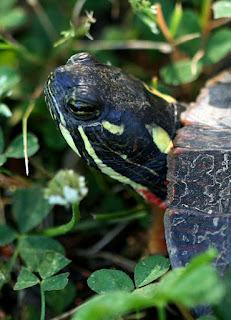 Then every couple of years we will be visited by a Common Snapping Turtle (Chelydra serpentina) wandering through the neighbourhood  looking, again, for somewhere to lay her eggs.  Big and well armoured but surprisingly quick Snappers are best not messed with. They most certainly will snap if harrassed.

This one was in the drive. Godzilla meets Gamera! 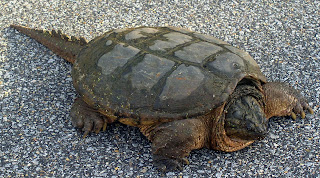 But only once before had we found our other species the Eastern Box Turtle (Terrapene carolina carolina). My first summer here I found one in the yard in the wet grass after a rainstorm. And then on Monday as I went into the garden to cut iris for Mrs.B. to take to the office what should I find tucked away hard by the fence at the back of the iris bed but Box Turtle number two. 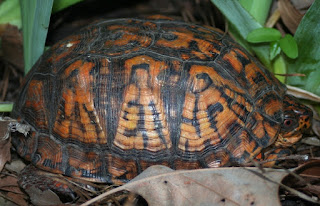 I'm no in the habit of handling the beasties I find in the yard unless its to move a caterpillar to a less decimated food plant or to snip away a few leaves to make for a better shot. But Mrs.B. insisted that I bring this one from the flower bed to the deck so Jr. could get a good look before he headed out for school. So I grabbed a few closer shots too between folks trying to feed him/her/it lettuce. 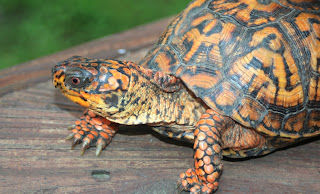 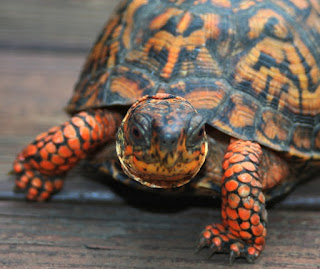 Didnt seem so interested in that but then it appears that Box Turtles are pretty much omnivorous and that the food in the iris bed was as likely worms and beetles as it was dandelions.

It is the State reptile of our neighbour North Carolina.

"The turtle watches undisturbed as countless generations of faster 'hares' run by to quick oblivion, and is thus a model of patience for mankind, and a symbol of our State’s unrelenting pursuit of great and lofty goals."
So sayeth the North Carolina Secretary of State and hurrah say I.
Meanwhile the Virginia legislature failed to adopt it as our own  on two occassions the last being in 2009 when it met Republican opposition apparently on the basis of its being cowardly on account of its hiding in its shell.
I kid you not.

UPDATE
The Box Turtle was back again on Wednesday morning close by the house. Maybe its going to be a garden resident. We shall see.
Posted by Banished To A Pompous Land at 2:23 PM No comments:

From The Little Yellow Eggs... 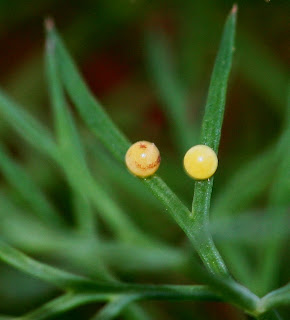 From the little yellow Black Swallowtail eggs come the tiny Black Swallowtail caterpillars (1st Instar). To the naked eye they look pretty much just black with a vague white band around the middle. But close up with the camera theres some orange and an interesting variety of lumps, bumps and spines. 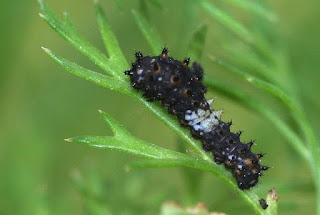 But then they are only around 4 mm at this stage. A couple of days and a molt later they look like this and have doubled in size. 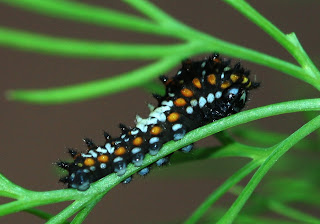 And soon they will be all change again. Currently there around 30 on the 2 pots of fennel, dill and parsley.
Thats enough herbs to hold this first group at least. Good through  July I'd expect; thats the usual pattern. Oddly enough, though there are two sets of caterpillars on the plants I havent seen a Black Swallowtail in the yard yet myself.

I have seen the Eastern Comma  (Polygonia comma) 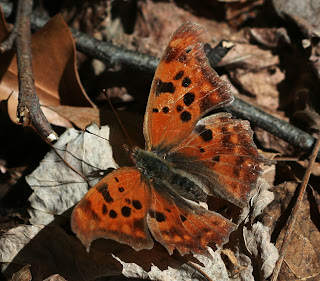 And the Pearl Crescent (Phyciodes tharos) which has a very attractive underwing as seen here. 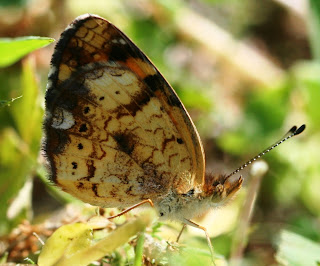 And finally for today, also on the wing but much larger, is the Red Winged Blackbird (Agelaius phoeniceus ). One of our most abundant and noisiest residents they spend most of the day perched in the cattails yelling at one another or harrassing me as I wander around the pond in search of the smaller and quieter inhabitants. 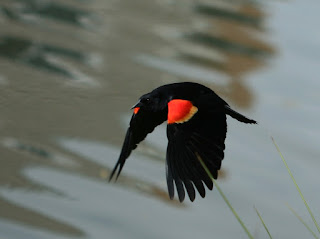 Posted by Banished To A Pompous Land at 11:22 AM No comments: