AND A HAPPY HALLOWEEN 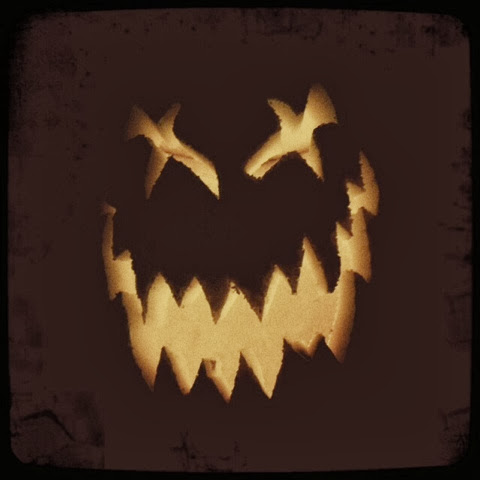 Our pumpkins are seriously old school this year! 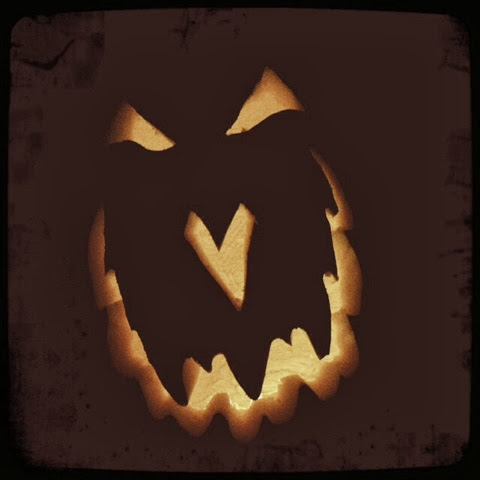 Posted by Banished To A Pompous Land at 1:32 PM No comments: 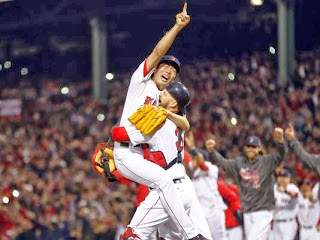 JOLLY GOOD SHOW THOSE CHAPS!
Posted by Banished To A Pompous Land at 11:04 AM No comments:

I posted my thoughts on Lou Reed on a much happier occassion last year.

But I can't let the sad day go by. We have lost a true original, one of the handful of individuals who really did change the face of popular music. 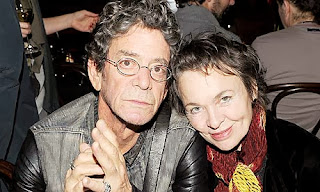 "Blink your eyes and I'll be gone"
Posted by Banished To A Pompous Land at 12:09 PM No comments:

No I haven't lost control of that function, yet! Fear not! The title comes from an essay in neurologist Oliver Sacks' collection The Man Who Mistook His Wife For A Hat. In the essay, a woman being treated with L-Dopa experiences an overwhelming unstoppable flood of memory of events some 40 years before brought on by some tiny seemingly insignificant trigger.

I'm not quite there yet, but I did have a flood of memories come back yesterday with not the hearing but the thought of a song. And the hearing again brought back even more. The song was "When An Old cricketer Leaves The Crease" by Roy Harper from 1975.  I don't think I can have heard it in at least 30 years. I love the song but oddly enough I have never owned a copy of it. But I remember it like yesterday being played in one of our 6th Form Common Rooms.

Back in Harrogate in my youth neither my own school, St Aidan's Church of England HS nor St John Fisher RC High School down the road had sufficient numbers to run a practical 6th form with a wide range of A-level subject options. And so we united the 2 small groups to make one decent sized body of pupils. I was one of the second year of this experiment, which incidently I learn still continues. So we had classes in both schools our own new concrete and glass late 60's monstrosity and Fisher's Victorian pile about 500 yards down Oatlands Drive. This made for much fun travelling between. Excellent for the smokers who could sneak a ciggy on the walk and much harmless tom-foolery and japes. Massed performances of Singing In The Rain come to mind as on wet days as we jumped in and out of the gutters giving crack throated voice to Arthur Freed's lyric though these were more in the style of Morecombe and Wise than Gene Kelly.

We also had a 6th Form Common Room in each school. Our home base at Aidans all chrome and formica and of its time. But the Common at Fishers was up at the top of the building pretty much the attic. It had nooks, crannies, oddly angled ceilings & skylights. It had a record player, it had beat-up, overstuffed  and disconcertingly stained  easy chairs and sofas of great antiquity. In short it was more like something out of another age, Geoffrey Willans' and  Ronald Searle's St. Custards comes to mind, looking back. 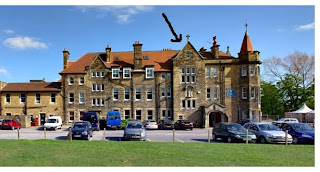 We came in one weekend before school started and painted the place ourselves.Painted it a ghastly 70s orange and brown combo as I recall, with the leftovers of someone's parents home beautification project.

Now this was a mixed 6th form yet somehow in my memories I don't recall any of the girls being around this space as they were back at St Aidan's with its cubic, scandinavian, pristine decor. If Bjorn Borg had been a sofa he'd have looked like St Aidans common room furnishings. No. the John Fisher common room was a scruffy, comfortable, blokish warren of hideyholes where we listened to prog-rock (and Roy Harper) and, as our 2 year residency drew to a close in mid 1977,  much heated debate accompanied the 'intrusion' of ever more punk and reggae.   The same went for staff 'intrusion' we didn't see female staff in there at all but I tink there was something comforting and familiar to the male staff who were to be found there fairly regularly. The fact that several of Fishers female staff were nuns might have had something to do with that too.

The one really rather sad part of all this nostalgia is that I really can't remember so many of the people. Unlike Mrs B. who has to beat the old HS contact off with a stick on Facebook. I do recall a few odd names but my friends don't seem to have very high profiles on line. The only old St Aidan's hand I'm still in touch with at all is Outa_spaceman and we didnt really get to know each other until after we both left school. I shall have to make an effort. The buggers must be out there somewhere mustnt they? All those old cricketers can't have left the crease.
Posted by Banished To A Pompous Land at 7:51 AM No comments:

Not Roaring But Rorem

Today marks the 90th birthday of American composer Ned Rorem. I must admit that most of his orchestral and chamber output holds little or no interest for me being somewhat conservative for my taste even in my 'maturity'. 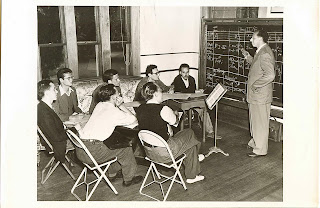 He studied under Virgil Thompson and Aaron Copeland amongst others and I'd be interested to hear some of his operatic works, which have largely passed me by. He's almost as well known as a diarist as a composer. Much of his 'fame' as such came for his Parisian diaries published in the 1960s.As an openly gay man he wrote of his relationships with others who were much less open, at least until Ned outed them before outing was even invented. He also has a notoriously barbed pen when writing on such topics as serialism and atonality.

But I'm celebrating Rorem for what he does best. He is a superb composer of song settings, one of the finest since Ives. Not as adventurous of course but who is...or ever will be?

Here are 4 tiny gems of Walt Whitman set in 1957 and performed here by Susan Graham and Malcolm Martineau.

...And The Garden of Horrors

With the final departure of last weeks rain we were able to get into the yard on Sunday and do our Halloween graveyard.
Nothing huge and new this year but more graves, and a grave zombie to replace the late lamented Marcus The Carcass who fell victim to a falling branch last year. Lets hope the weather is kinder this year and everything makes it through to the actual festivities. 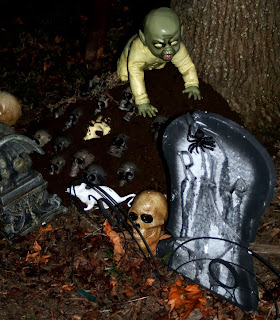 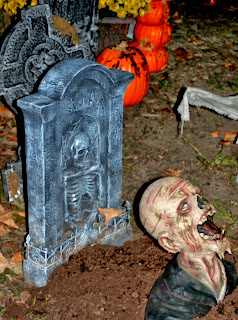 Posted by Banished To A Pompous Land at 9:42 PM No comments:

Banished Jr. trying out his halloween look for a party Saturday. 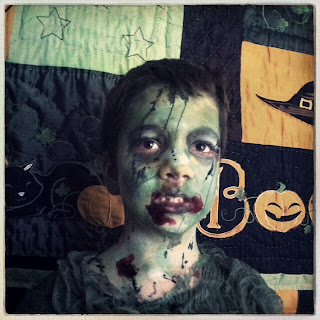 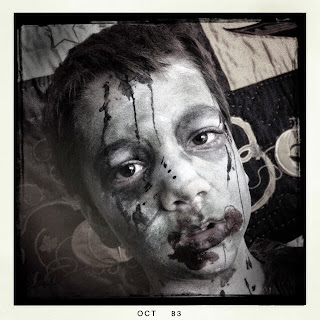 Come October 31st he'll be joined by the rest of the family.


Posted by Banished To A Pompous Land at 3:14 PM No comments:

When we were last at the  Norfolk Botanical Gardens in July one of the stars of  the butterfly house was the Gulf Fritillary. 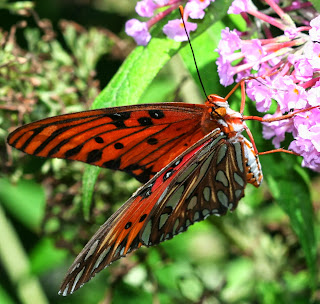 We were back there yesterday and one of the things we found pretty quickly was this caterpillar. 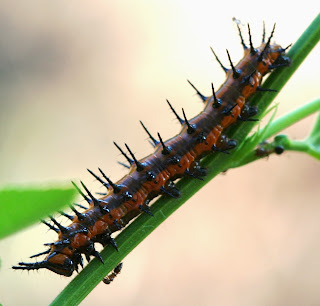 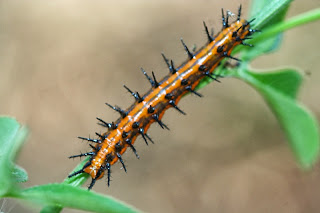 And I had to check with BugGuide but yes it is the caterpillar of the Gulf Fritillary. Now the butterfly does find its way as far north as southern Virginia but it is right at the edge of its range. So was this the child of a wanderer from the South or were its parents escapees from the butterfly house? Either way it was a surprise find.

Lots of other nice finds yesterday too in the unseasonable warmth. Its October , it shouldnt be 86f...not even here.

It being fall here, in theory at least, grasshoppers are everywhere. I found some bean plants positively alive with Obscure Bird Grasshoppers (Schistocerca obscura ) not as big as some I've found here, where they can look like locustseasily 3 inches long. But hese more than made up for size with sheer numbers. The back legs are especially striking, black with black tipped yellow spines. 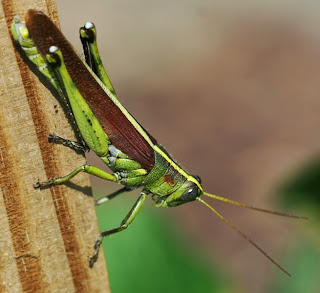 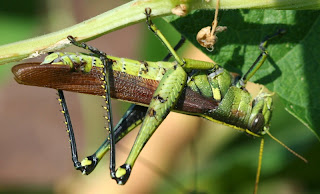 Wasps here are many and varied but happily most of the time they have much better things to do than bother passing folks. Things like building mud nests like this Black and Yellow Mud Dauber (Sceliphron caementarium) 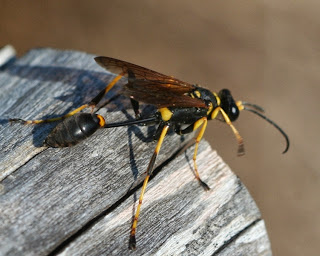 Surprised to find a lot of frogs in shady spots around the small ponds and streams. Not surpised that they were there but surprised how laid back they all seemed. Around our own pond you get within 6 feet of most frogs and all you'll know is a "Peep!" and a splash as they disappear. But the gardens there were Green Frogs (Lithobates clamitans.)
Southern Leopard Frogs (Lithobates sphenocephalus) 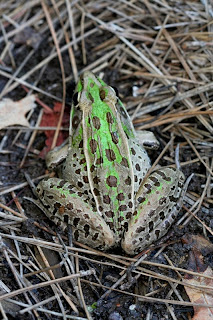 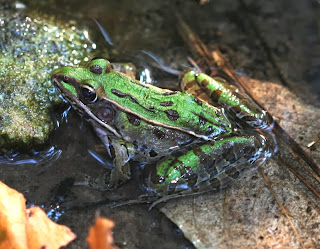 And these little dark beasts I'm not sure of the identity of. 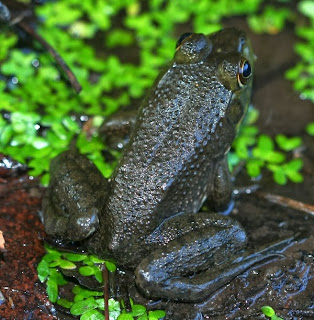 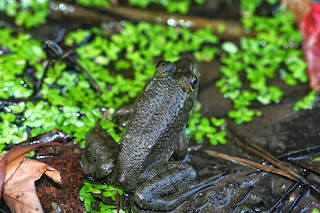 One Of Those Days

Some days you can look at the birth and death anniversaries list and see not a name that means much. But today seems to have been a huge date for musicians birthdays. At least for musicians I've heard of... for good or ill.

Don McLean 1945 (Ok, before my time and not my thing but I know who he is)
Richard Hell 1949 ( Television, Voidiods, Heartbreakers)
Mike Rutherford 1950 (Genesis before and after)
Sting 1951
Phil Oakey 1955 (The Human League)
Django Bates 1960 (Loose Tubes and lots more)
Sigtryggur Baldursson 1962 (Sugarcubes)
Gillian Welch 1967 ( Country/Folk/Bluegrass singer/songwriter)
Badly Drawn Boy 1969 (One of Mrs. B's faves)

And a few others yet who are far too young for me to have possibly heard of.

So I'm going with Gillian Welch.

Her material is just so varied and almost always marvellous. Here is Time (The Revelator) , which was my introduction to her music courtesy of BBC Radio 3's Late Junction. That was about a dozen years ago which makes her a fairly recent addition to my musical universe.
And on a 'lighter' note Look At Miss Ohio. Lets not forget guitarist  David Rawlings. Its difficult to imagine these songs without him.

And finally Elvis Presley Blues
﻿
Posted by Banished To A Pompous Land at 11:40 AM No comments: